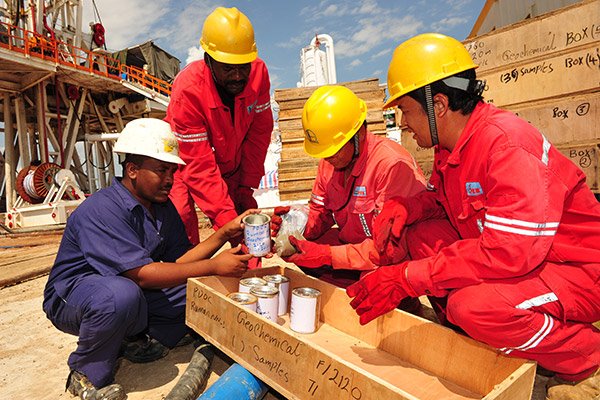 Technicians from Sinopec and local African workers at an oil exploration site in Sudan. [Photo/China Daily]

Asia's biggest oil refiner China Petrochemical Corp, known as Sinopec, have nailed an agreement to acquire a refinery and key assets of Chevron South Africa and Chevron Botswana for about $900 million.

Apart from the refinery, under the deal Sinopec has also bought a retail business and storage terminals from Chevron.

The remaining 25 percent interest of the Chevron South Africa is held by a consortium of Black Economic Empowerment shareholders and an employee trust, according to Chevron spokesman Braden Reddall.

Once approved, it will be Sinopec's first refinery on the African continent.

An analyst said the acquisition was meant to convert the site into a profitable storage terminal, using the energy behemoth's downstream experience and advantages.

"Sinopec used to focus mostly on the domestic market, but now it's interfacing more with the global market, with its ample expertise and experience."

According to Sinopec, the acquired assets include Chevron's 100,000 barrels per day capacity Cape Town refinery, its lubricants manufacturing plant in Durban, a network of more than 820 service stations with 220 convenience stores across South Africa and Botswana, and storage tanks and oil depot distribution facilities.

With a growing middle class, demand for refined petroleum in South Africa has been increasing at an average annual rate of nearly 5 percent during the past five years, currently reaching a total of approximately 27 million metric tons, Sinopec said.

The company said it has a proven capability to deliver complex large-scale projects, with its annual capacity of more than 10 million tons of refined products and with an annual ethylene production of more than 1 million tons.

The agreement has been filed with the Chinese government and remains subject to regulatory approvals in South Africa and Botswana, Sinopec said.