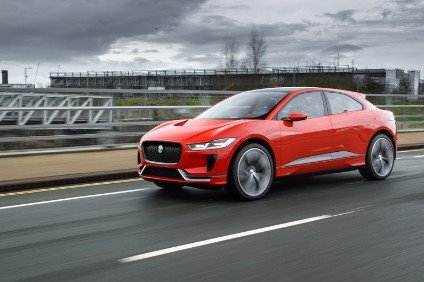 Jaguar has unleashed its first electric vehicle – the I-Pace – on the road for the first time.

The car was driven on the streets of London's 2012 Olympic Park ahead of the announcement of more details and media/VIP drives in late 2017 and sales in the second half of 2018.

Jaguar design director Ian Callum said: "The feedback on the I-Pace concept has been fantastic. We've torn up the rule book to create a vehicle with supercar inspired aesthetics, sports car performance and SUV space, in one electric package. It has surprised people and the enthusiasm for our first electric vehicle has been beyond all my expectations.

"Driving the concept on the streets is really important for the design team. It's very special to put the car outside and in the real world. You can see the true value of the I-Pace's dramatic silhouette and powerful proportions when you see it on the road, against other cars. The concept represents the next generation of battery electric vehicle design. For me, the future of motoring has arrived."

The I-Pace will rival Tesla models with acceleration to 60 mph in around four seconds and a range of "more than 500km" (300 miles; NEDC cycle) using a 90kWh lithium-ion battery. Jaguar claims the car can be recharged to 80% in 90 minutes - using 50kW DC charging.

Compact, light electric motors at the front and rear axles generate a combined output of 400PS and 700Nm of torque, with the all-weather benefits of all-wheel drive.

The I-Pace will also deliver the agility, ride comfort and refinement that will set it apart from all other electric vehicles: it will be a true Jaguar and a true drivers' car, the automaker claimed.