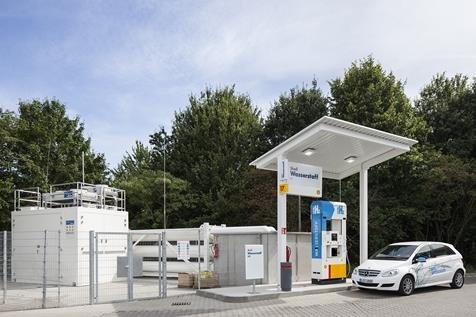 With these new stations, the partners have moved yet another step closer to a nationwide H2 supply network. The new sites are both conveniently located directly on the A661 and A66 motorways at key points of intersection for people driving from north to south through Germany.

H2 Mobility commissioned the new H2 station in Frankfurt’s Hanauer Landstrasse 334 while Daimler AG is the owner of the filling station in Wiesbaden’s Borsigstrasse 1. The innovative H2 handling technology hails from two of the big names in this sector: Air Liquide and Linde. Both stations are located on Shell premises.

The two cutting-edge H2 filling stations in Wiesbaden and Frankfurt have the capacity to serve 40 fuel cell electric vehicles (FCEVs) every day. A H2-powered fuel cell vehicle does not emit any tailpipe GHGs or other pollutants.

A number of manufacturers already have H2 FCEVs on offer with an operating range of between 500 and 700 kilometres. Daimler AG is set to present its latest generation of vehicles based on the Mercedes-Benz GLC this year.

Stijn Van Els, Management Board Chairmen Shell Deutschland Oil GmbH, said, “H2 technology is a very promising technology and H2 a fuel of the future. We believe this alternative drive system will play an increasingly important role in markets like Germany, England, Benelux and the USA as of 2020. We at shell are on target.”

Pierre-Etienne Franc, Vice-President Air Liquide Advanced Business and Technologies, H2 energy contributes to efficiently decarbonise the transport sector, which is one of the main sources of air pollution in our cities. Together, industry and government has made a strong commitment to accelerate the deployment of H2 for cleaner mobility in Germany.

As a founding partner of H2 Mobility, Air Liquide brings its expertise to support the construction of the world’s largest H2 station network. This new station opened with Shell in Frankfurt is another demonstration that H2 is now a reality.’