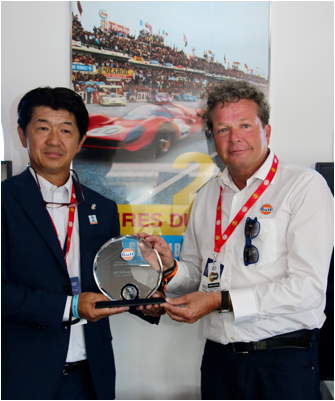 Gulf Oil International is delighted to announce that it has reached agreement with a newly formed Japanese business to establish and develop the first Gulf service station network in Japan.

Mr Hisashi Kunie - owner of Gulf Racing Japan has established a new company for this venture, which will trade as Gulf Japan.

The new license for Japan was formally launched, last weekend, at this year’s running of the famous Le Mans 24 Hour race in France – with Mr Kunie (pictured, above left) being presented with a specially commissioned Gulf commemorative glass plaque to mark the occasion by Gulf Oil Vice President International, Frank Rutten (above right).

Gulf has been associated with Mr Kunie’s race team in Japan for several years. During that time, it has competed, with success, in Japan’s Super GT Championship, the Porsche Carrera Cup Japan and other racing series in various parts of S.E. Asia.

The aim is to convert 10% of Japan’s non-branded independent service stations to Gulf. The unbranded stations are the initial targets because of their relatively quick turnaround time and the plan is to start with a six month trial period of several Gulf sites.

Gulf Oil International Business Manager, Paul Stannard comments, “We are truly excited to be launching a Gulf Fuel Retail network in Japan, one of the world’s key automotive markets. Gulf Lubricants has a presence in Japan since 1998, via GOTCO-Japan Ltd., http://www.gulf-japan.com who market high quality Gulf lubricant products. We are also extremely pleased to be working with a company like NSP along with Gulf Racing Japan with whom we already have a well-established relationship."

The announcement of a network of Gulf branded petrol stations in Japan is a very significant move for Gulf internationally and it harmonises completely with other developments in Gulf’s business expansion plans. These include Gulf’s new lubricants plant in Southern India, which will be commissioned in the next four months and the Gulf brand entering the business of selling gas and electricity, which also will commence in the next few months.