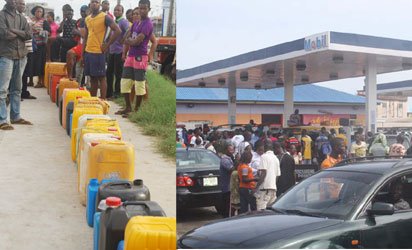 The rapid growth of churches and mosques in Nigerian as well as the mushrooming of petrol stations across the country are two trends in need of serious attention.

There are two trends in need of serious attention in Nigeria today. One is the rapid growth of churches and mosques, the former predominantly in the South and the latter in the North.

The other trend is the mushrooming of petrol stations across the country. The two trends highlight two of the nation’s problems, namely, religion and the economy. This essay offers an exploration of the interconnections between the two.

Let’s begin with petroleum and the economy. The curse on the Nigerian economy began to incubate way back in 1908 when petroleum was first discovered in Araromi in Ilaje-Ese Odo Local Government Area of Ondo State but was not exploited owing to disturbances from the two World Wars. The discovery would, however, lead to further exploration in the postwar years. Oil was later discovered in 1956 in Oloibiri in Ogbia LGA in Bayelsa State, where commercial exploration began in 1958.

Prior to commercial oil production and up until the 1970s, Nigeria was self-sufficient in food production and agriculture accounted for 97 per cent of all revenues from exports. Cocoa, palm oil, rubber, and groundnut were major money earners for the country and for individual farmers. Besides, yams, cocoa, corn, rice, millet, and other food crops were produced in abundant commercial and consumption quantities.

However, by the late 1970s, the rise in federal revenues from petroleum extraction was met by a steep drop in agricultural production. By the 1980s, self-sufficiency in food had disappeared and Nigeria gradually began to depend on food imports. So bad has the situation become that the Federal Government recently began to take drastic measures to ensure food security through homegrown produce. For example, rice import was banned to encourage domestic cultivation. For the first time in many years, more rice is produced at home than imported from elsewhere.

In the meantime, unbridled corruption had accompanied the oil boom, leading to all kinds of fraudulent practices which prevented the needed translation of the boom to necessary infrastructural development. Simultaneously, key state institutions were weakened in order to aid or mask corruption. By 2015, more oil money had been stolen or squandered than spent on development.

Today, the nation is in trillions of naira in debt, and much of the existing infrastructure has crumbled. Electricity and water are in short supply. Roads and bridges are crumbling all over the place. Schools, polytechnics, universities, hospitals, and other public structures lack necessary facilities, leading to a sharp drop in the standard of education and health care. Worse still, graduates cannot find employment, because the nation has de-industrialised and many manufacturing companies have folded up.

The economic downturn has led to increasing unemployment and poverty rates. Those who fall sick cannot find adequate care, either for lack of funds or for lack of necessary facilities in the hospitals.

Much as the President Muhammadu Buhari administration would have loved to reverse the economic downturn, the puncture in the economy, due largely to corruption, has been too deep to handle.

Beginning in 2014, oil prices started falling steadily, leading to a drastic reduction in oil revenue. This would be further complicated by a reduction in production due partly to pipeline vandalism, resulting from militant agitations in the Niger Delta, and partly to OPEC cuts to combat increasing production glut in the market. The bulk of whatever revenue accrued from oil was corruptly diverted.

To worsen the situation for Nigeria, old time buyers of Nigerian crude oil, such as the United States, have started looking elsewhere or to alternative sources of energy. Across the globe, nations are setting targets for getting rid of fossil fuel. Norway, for example, has set a deadline of 2025 by which time it would be illegal to make or sell petrol- or diesel-fuelled cars in the country. France has set its own deadline for 2040. If this trend continues, fossil fuel may be outlawed by many countries by the middle of the century.

Most Nigerians, however, are unaware of this trend. That’s why more and more petrol stations are springing up all over the place, even as the government is preaching diversification from oil. The idea that there is plenty of money to be made from the oil business has lured some petrol dealers into the business – they want to derive their share of petrodollar, no matter how short term the business may be.

I was first struck by this development when I visited Idanre, my hometown, where I observed that petrol stations were springing up, even in impossible locations in the heart of residential areas. Some dealers converted erstwhile ancestral homes into petrol stations. In Alade-Idanre, one petrol dealer, who is also a cocoa dealer, put up a twin structure, separated only by a wall. One side is a cocoa store, while the other is a petrol station.

While some have set up petrol stations for economic survival, others have built churches and mosques. Like setting up petrol stations, when the oil business is on the decline, churches are springing up everywhere, especially in the South, just when churchgoers are dwindling in the UK and the United States. Yet, many of our churches are filled to the brim, especially for the celebration of rites of passage, such as weddings and funerals, when all kinds of offerings are requested by the pastors.

The churches range in structures from ornate cathedral buildings to sheds and tree shades. Their purposes are more than religious. Like petrol stations, they are also economic ventures for their owners or pastors, some of whom own exotic cars, luxury apartments, jets, universities, and other material things.

Many churchgoers or their children cannot afford to attend the universities or rent the apartments owned by their pastors. Some churchgoers lose their wives or girlfriends to pastors. Yet, the people flock to the churches and overpopulate various programmes every now and then. Why is this so?

Albert Camus offers another interesting explanation. Religion, he argues, offers the people an escape from the meaninglessness of their existence, especially in an environment besieged by political hopelessness and economic helplessness.

In Nigeria today, those who can afford it set up petrol stations or churches to combat the hopelessness of their existence. Those who cannot, seek an escape in churches and mosques, where the sermon and frenetic prayers serve as opium. With lingering political and economic uncertainties, it remains unclear how much opium they will still need and for how long.