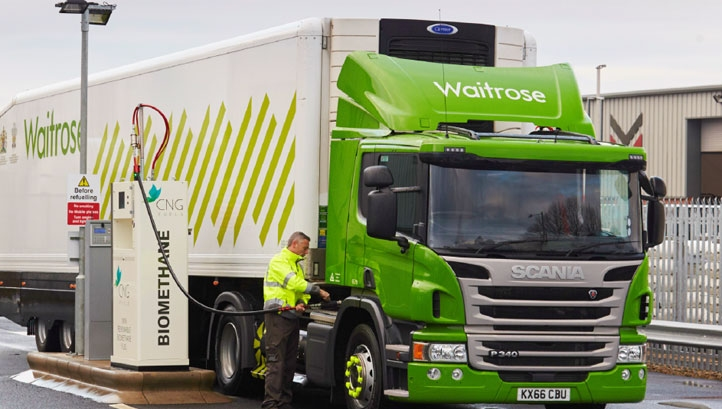 The station in Leyland UK can serve up to 600 HGVs daily and has certified 100% renewable gas, which qualifies for Renewable Transport Fuel Certificates

Cadent partnered with CNG fuels to construct the UK’s first facility that takes compressed gas, renewable or otherwise, from a high-pressure network into a refuelling station in Leyland, Lancashire in March 2016.

The gas network operators commissioned independent analysis of the first 14 months of operation in the station. Just days after the UK Government announced an Air Quality Plan to crackdown on emissions, the analysis revealed that lorries using the gas at the station emitted 84% less carbon dioxide compared to diesel HGVs.

“This report proves there are significant environmental and economic benefits not just in using compressed natural gas, but in dispensing it from the high-pressure system,” Cadent’s director for network strategy David Parkin said. “This is a credible option, available today, and our high-pressure network is ideally situated to support its growth, as in most cases our pipeline tracks the UK’s major motorways.

“We hope now that leaders in the transport sector, central and local government will realise the potential that exists here, investing and removing any barriers to growth to make CNG the fuel of choice for HGVs, and we think buses too.”

The station in Leyland can serve up to 600 HGVs daily and has certified 100% renewable gas, which qualifies for Renewable Transport Fuel Certificates, while CNG Fuels pays for an equivalent amount of gas to be produced by recycling food waste into grid-quality biomethane.

It is the first of its kind to be placed onto the high-pressure gas network. All UK gas networks pass through the National Grid’s transmission system and enters into distribution networks at high pressure. It is then transported through reducing pressure tiers before being delivered to consumers.

Cadent, which delivers gas to around 11m consumers, owns four of the eight regional distribution networks and is actively exploring how low-carbon alternatives to natural gas “could be used for heating and transport long into the future”.
Waitrose fleet

The fuel station at Leyland has been supplying low-carbon alternatives to Waitrose’s fleet since September 2016. The retailer showcased new commercial vehicles that run on compressed natural gas (CNG) biomethane and is aiming to have 50 of the vehicles in its fleet by the end of the year.

Despite the vehicles costing 50% more in upfront capital compared to purchasing diesel alternatives, CNG Fuels is providing 100% biomethane fuel that is around 40% cheaper than diesel fuel.

John Lewis’s general manager of transport, which incorporates Waitrose, Justin Laney added: “As well as being quieter, every long-distance lorry we switch from diesel to gas saves as much CO2 as taking 70 cars off the road. This is why we plan to switch more of our trucks to biomethane in the future.”

Even if the gas is not from renewables, and instead derived from fossil fuels, the wheel-to-wheel emissions savings could still be as high as 15%.

In fact, station-specific emissions at Leyland relating to operations such as electricity use, were 79% lower than stations using gas from lower pressure pipes.

Wheel-to-wheel emission savings at the station were also 6% greater than those connected to medium pressure networks.

HGVs account for around 15% of emissions from UK transport and 4% of total emissions. Cadent says the report offers evidence that CNG should be the “fuel of choice for HGVs in the future".