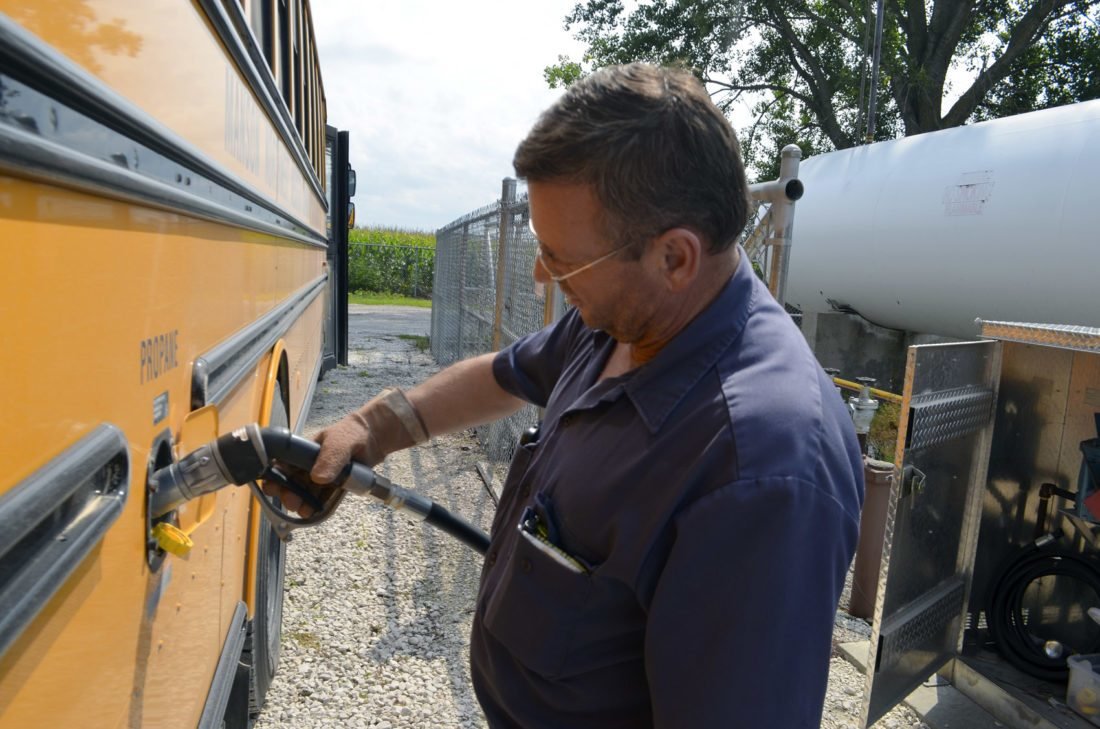 Every morning Mark Pugh tops off the tanks on school buses in the Manson Northwest Webster School District’s fleet.But instead of pulling up to a diesel pump, Pugh hooks these buses up to the same large LP tank that’s used in the winter to heat the Barnum school building.

MNW has been adding propane-powered buses alongside traditional diesels for seven years now.
And the district is not alone — more and more schools around the area are turning to this alternate fuel to save money and create fewer emissions.

“We just got them this year, about a month ago,” said Leo Reigelsberger, transportation director for Humboldt Community School and Twin River Community School. “All the drivers so far that have driven them do like them.”

Pocahontas also has propane buses, Reigelsberger said. And there are quite a few in Algona. Fort Dodge Community School District doesn’t have any yet, but it is evaluating them as an option going forward, said Communications Director Jennifer Lane.

This year Southeast Webster Grand and Prairie Valley are each leasing two, said Brian Johnson, superintendent for both districts. But at MNW, six of the nine route buses are propane-powered, said Pugh.
“A lot of it was the school board wanted to get involved, and to explore different options for saving on fuel,” he said.

Propane is much cheaper per gallon than diesel, and there’s also a federal tax credit for using it. 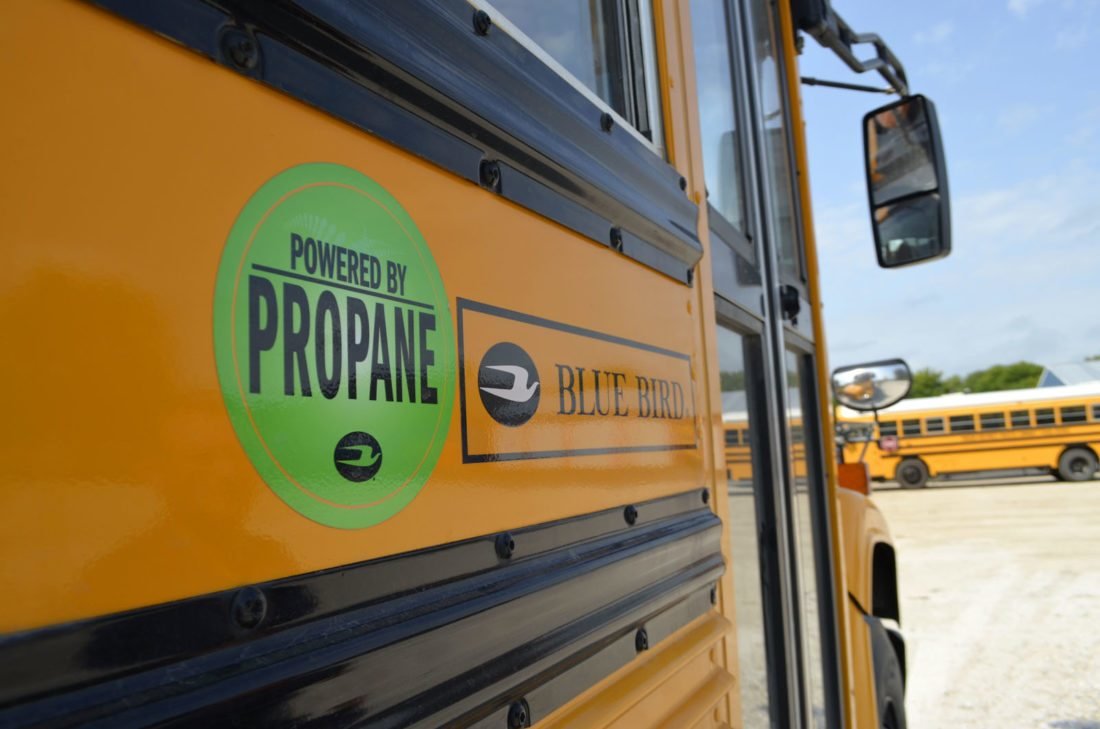 “It’s always been under $1 a gallon,” Pugh said. For years, the rebate was 50 cents per gallon. “One year we bought it for 48 cents, so the federal government paid us 2 cents to drive it.”

The rebate is now is 30 cents. The school has a contract with Star Energy for 59 center per gallon this year — so it pays about 29 cents. Of course, propane buses get fewer miles per gallon than diesel. “The mileage isn’t as good. It’s probably about half,” Pugh said.

Still, by paying less than half the cost per gallon and getting half the mileage the school comes out ahead, he said. Tax credits and saving money on fuel are far from the only advantage to propane buses. “Everybody wants to talk about the tax credit,” said Pocahontas Area Community Schools Transportation Director Jeff Hansen “I know that’s an important thing, but we like other things about it.

“There’s an emissions bonus there. We have buses sitting there idling back to back, and that diesel exhaust fumes were a big deal here a few years ago. You don’t have that with the propane.”

There was a push a few years ago to reduce school bus idle time to reduce emissions or even shut down buses while they were waiting at school. That’s not so easy to do during the winter, Hansen said.
Diesel buses today also require a diesel exhaust fluid additive to further reduce emissions. That DEF goes in a separate tank.

“You have to run this extra product into the exhaust to make it meet emissions,” Hansen said. “That will freeze on you. It’s kind of temperamental, it has a short shelf life, it has to be kept at certain temperatures. … You don’t have to do that on a propane bus.”

“They start and warm up like a gasoline motor, so you don’t have sit there and warm them up for 15 minutes in the morning, like you do with a diesel bus, to get any heat out of the motor,” he said.

The drivers love that, he added.

The buses are nice to drive too.

“They have plenty of power, I’ll tell you that,” Pugh said.

The drivers appreciate the quietness of a propane engine compared to diesel too.

“When you’re trying to communicate with a bus full of kids, the less noise the better,” Hansen said.
Sometimes bus drivers can’t even tell they’re running at first, Pugh said.

The technology has changed quite a bit from the propane motors farmers might remember from the ’80s, he said. The motors inject propane under high pressure into the cylinders while still in liquid form, according to MNW bus mechanic James Francois.

In the 1980s tractor engines, vapor was injected. “Liquid is much better,” Francois said.

Pocahontas has one Blue Bird and one International, Hansen said.
There are some things to consider when driving propane. With the lower mileage, one tank of gas doesn’t get you as far.

“There’s a bit of a range issue,” Hansen said. “You have to pay attention to where you’re sending that bus.
“We can’t run one of those to Des Moines and back, for instance. There’s also a premium on the price of a propane motor. It costs more than a diesel motor, so you have to factor that into your fuel savings when you consider your purchase.”

Overall, though, it’s a good trade-off, Hansen said. “We’ve been real happy with them. The range is something you have to be aware of, but for me it’s not a problem. I just know where I can and can’t send it.”