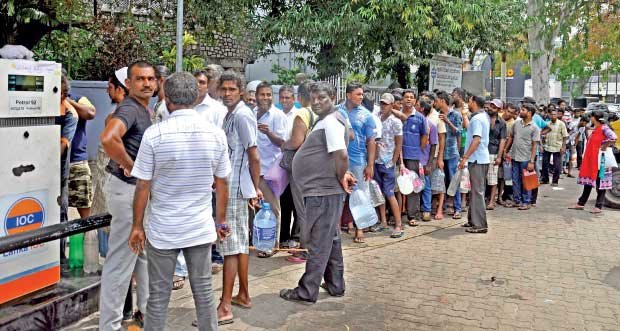 Thousands of Sri Lankan motorists formed long queues for fuel for a fourth-straight day on Monday after CPC limited the supply last week following a delayed fuel shipment and rejection of another due to the wrong specifications.

Ranatunga said the next shipment of 40,000 metric tonnes (MT) of gasoline is expected on Wednesday and the shortage could be addressed on Thursday after immediate distribution.

"Once the shipment comes, the situation will return to normal," he told reporters in Colombo.

The November 8 shipment was originally expected to arrive last Thursday, but officials did not give any reason for the delay.

Ranatunga said the government was working to resolve the crisis, which came weeks after authorities turned away a shipment of about 40,000 tonnes of gasoline saying it was contaminated.

"I apologise to consumers for this inconvenience, but we rejected the last shipment because we didn't want to give substandard product to our motorists," the minister told reporters.

"We were expecting another shipment at the start of this month but it was delayed," he said, adding he now expected it to arrive on Wednesday night.

Gasoline is used mostly for cars, motorcycles and the country's ubiquitous tuk-tuk taxis.

The situation forced many commuters to turn to public transport, which was unaffected as it mostly runs on diesel.

Ranatunga said the situation had been made worse by panic buying fuelled by reports of a fuel crisis on social media.

Petroleum officials said they were down the last 10,000 tonnes of gasoline in their storage tanks while the daily average consumption of 2,500 tonnes had shot up by over 50 percent in the past two days.

Ranatunga said the government would have to consider bigger and better storage arrangements to ensure supplies to the island, which has no oil of its own and imports finished products as well as crude oil for refining locally.