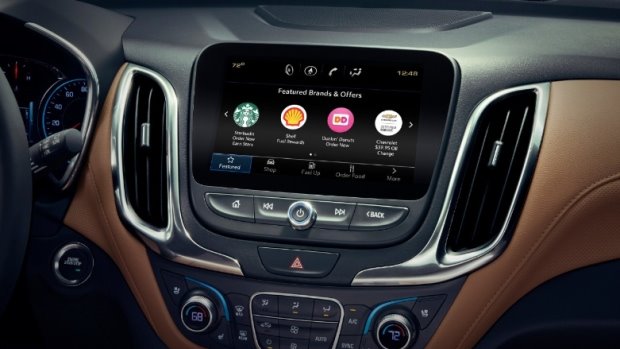 General Motors is rolling out a new digital platform called Marketplace that makes shopping for food and fuel an integral part of its cars' infotainment systems.

Why drive to a shop when the shop can come to your car? That's the idea behind Marketplace, a new service from GM that officially rolls out this month.

Described as the industry's first "commerce platform for on-demand reservations and purchases of goods and services," Marketplace enables drivers to constructively use time that they would otherwise lose thanks to the daily commute to and from work.

"The average American spends 46 minutes per day on the road driving. Leveraging connectivity and our unique data capabilities, we have an opportunity to make every trip more productive and give our customers time back," said Santiago Chamorro, VP for Global Connected Customer Experience, GM.

To begin with, that productivity will manifest itself in the ability to pre-order their favorite type of coffee from Starbucks, or pre-order and pay for Dunkin' Donuts directly from the car's infotainment screen.

Other food-focused business that will be accessible via the service include Applebee's, IHOP and delivery.com, while a tie-in with TGI Fridays will let drivers reserve a table while on the road.

But that's just the start. Drivers will also be able to find and pre-pay for parking with Parkopedia, find an ExxonMobil filling station or in the case of Shell, find the closest station and pay for fuel directly via the car's dashboard rather than in person at the kiosk.

"For most retailers and consumer brands the daily commute is the only time not accessible in a consumers' day," said Chamorro. "Marketplace gives merchants the ability to more safely engage with drivers and passengers in a meaningful way that provides true value for our customers."

The system has been designed to cause minimum distraction and is set to add further partners in the coming months. Marketplace is compatible with any 2017 or 2018 model-year Chevrolet, Buick, GMC or Cadillac with a full infotainment system and 4G LTE connectivity and, according to GM, represents the shape of driver-focused digital features and services to come.

"Marketplace is the first of a suite of new personalization features that we will roll out over the next 12 to 18 months to nearly four million U.S. drivers," Chamorro said.