Tesla is collaborating with Anheuser-Busch and United Parcel Service to build on-site charging terminals at their facilities as part of the automaker's efforts to roll out the vehicle next year. 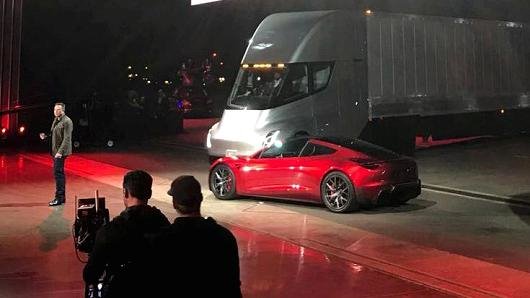 Tesla CEO Elon Musk shows off the Tesla Semi as he unveils the company's new electric semi truck during a presentation in Hawthorne, California, U.S., November 16, 2017

Elon Musk, the chief executive of Tesla, has said little about how he plans to turn his prototype electric truck into reality. But Reuters has learned that Tesla is collaborating with Anheuser-Busch and United Parcel Service to build on-site charging terminals at their facilities as part of the automaker's efforts to roll out the vehicle next year.

Details of the partnerships, which have not been disclosed previously, are still being hammered out, but include design and engineering from Tesla, the companies said. They declined to disclose what portion of the building costs, if any, Tesla would pay, or whether Tesla would be compensated for its work

The firms are among nine major corporations that have placed pre-orders for Tesla's truck, dubbed the Semi. With questions swirling over whether Tesla can make good on its aggressive timetable, news of the collaboration is a sign that corporate customers are taking the effort seriously, and that Tesla is working to solve one of the biggest impediments: keeping the big-rigs powered.

Companies that spoke with Reuters said the first step is to install charging equipment on their own premises. The Semis would be limited to routes that would get them back to home base before the batteries are spent, the firms said.

PepsiCo, which has reserved 100 Tesla trucks, said it may eventually explore sharing facilities and costs with other companies. The food conglomerate has held multiple meetings with Tesla to discuss the recharging effort, said PepsiCo executive Mike O'Connell.

"We have a lot of in-house capability around energy and engineering ... and certainly Tesla brings their expertize to the table on energy and charging," said O'Connell, senior director of supply chain for Frito-Lay North America, PepsiCo's snack-food unit.

Separately, in a high-tech twist on the traditional truck stop, Tesla is moving ahead with plans for its own stations to sell electricity to truckers who pull up for a charge, according to customers and transportation industry executives who have discussed the matter with the Silicon Valley automaker.

Tesla already operates more than 1,100 "supercharger" stations globally for drivers of its passenger cars. Musk has spoken publicly of doing something similar for its heavy-duty trucks by installing a network of solar-powered "megachargers" that could juice up a Semi battery in 30 minutes

But just how quickly Tesla could build a robust network of electric filling stations for commercial truckers is not clear. The company is already stretched thin and burning cash. Tesla has struggled to ramp up production of its new Model 3 sedan, which has been plagued by delays.

Some analysts and trucking executives doubt that Tesla can deliver the Semi in 2019, much less a vast charging infrastructure to support it.

A Tesla spokeswoman confirmed that the Fremont, California-based company is working closely with large customers to build Semi charging stations. She declined to comment further on the arrangements or Tesla's plans for its own truck-charging terminals.

Anheuser-Busch is evaluating installing its own charging equipment for its 40 Tesla Semis at large breweries and other key locations, according to James Sembrot, senior director of supply chain for the St. Louis-based beer maker.