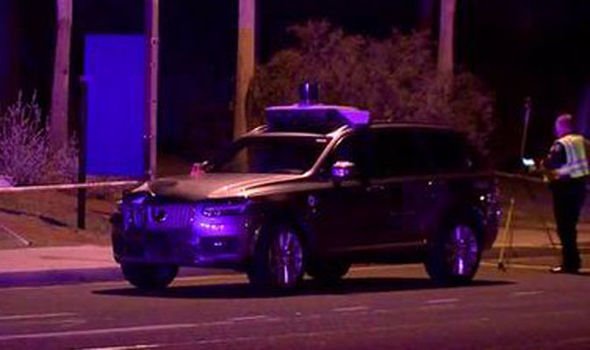 A SELF-DRIVING car has killed a woman in Arizona, USA in what is thought to be the first time a pedestrian has been killed by an autonomous vehicle on public roads.

The self-driving vehicle, operated by Uber, was in autonomous mode with a human safety driver at the wheel when it struck the woman, according to Tempe police.

In a statement, the force added: "The vehicle was traveling northbound ... when a female walking outside of the crosswalk crossed the road from west to east when she was struck by the Uber vehicle.”

Uber has since announced it has suspended its autonomous vehicle program across the US and Canada.

The woman, who has not yet been publicly identified, was struck overnight between Sunday and Monday in the Phoenix suburb of Tempe.

The vehicle involved in the accident was a Volvo, a person familiar with the matter said. Local television footage of the scene showed a crumpled bike and a Volvo XC90 SUV with a smashed-in front.

The U.S. National Highway Traffic Safety Administration and National Transportation Safety Board said they were sending investigative teams to probe the crash. NHTSA also said it was in contact with Volvo.

"We’re thinking of the victim’s family as we work with local law enforcement to understand what happened."

The company had been testing its self-driving cars in Phoenix and Tempe in Arizona, as well as a range of other cities across North America including Pittsburgh, San Francisco and Toronto. All tests have now been suspended.