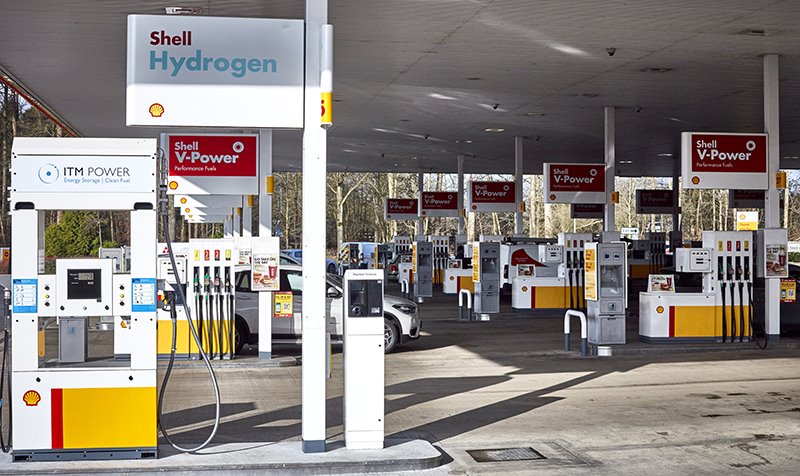 A partnership between Shell and ITM Power has resulted in the opening of the UK’s first hydrogen filling station to share a forecourt with petrol and diesel fuel pumps.

Earlier this week a consortium including ITM Power, Shell, Toyota, Honda and Hyundai had won £8.8 million in funding from the Department for Transport “DfT” to improve access to an expanded network of hydrogen refuelling stations to support the continued roll out of hydrogen fuel cell electric vehicles (FCEVs) in the UK.

In a statement issued today, Shell and ITM Power said that the new M40 site’s hydrogen is generated on-site using an electrolyser that requires only water and electricity to generate the hydrogen gas.

“Bringing hydrogen under the canopy for the first time is a fantastic step towards making it a convenient and viable fuel choice for UK drivers.”

The hydrogen station at Beaconsfield is the fifth hydrogen refuelling site in the UK to be supplied by ITM Power and will be the first to be opened as part of the H2ME project.

The initiative has been partially funded by the European Fuel Cells and Hydrogen Joint Undertaking (FCH JU), and the UK’s Office of Low Emission Vehicles (OLEV).

Hydrogen fuel cell electric vehicles convert hydrogen into electricity to power the engine and produce only heat and water when driven.

They can travel up to 700 kilometres on a single tank and can be refuelled in a few minutes.

Dr Graham Cooley, chief executive of ITM Power, said: “ITM Power is pleased to open this new hydrogen station which is the first to sit on the main forecourt, alongside the petrol and diesel pumps. "This shows a big step forward in offering Shell customers a clean, green fuel, which is generated on-site, eliminating fuel deliveries.

“We look forward to working alongside Shell to deploy further stations and grow the hydrogen refuelling infrastructure in the UK.”

Hyundai, Toyota and Honda are among the key car manufacturers, which have developed hydrogen vehicles in the belief that the fuel is the key to clean transport in the future.

Speaking to AM ahead of the Geneva Motor Show, Honda UK managing director David Hodgetts told AM that Honda still saw hydrogen as the long-term solution to the current emissions problems.

He said: “Honda thinks that’s hydrogen but I don’t think that’s going to happen until many, many years away when we have genuine hydrogen cars that are available commercially that aren’t supported by manufacturers.

“Then we have the chicken and egg infrastructure problem. We’re still some years away.”