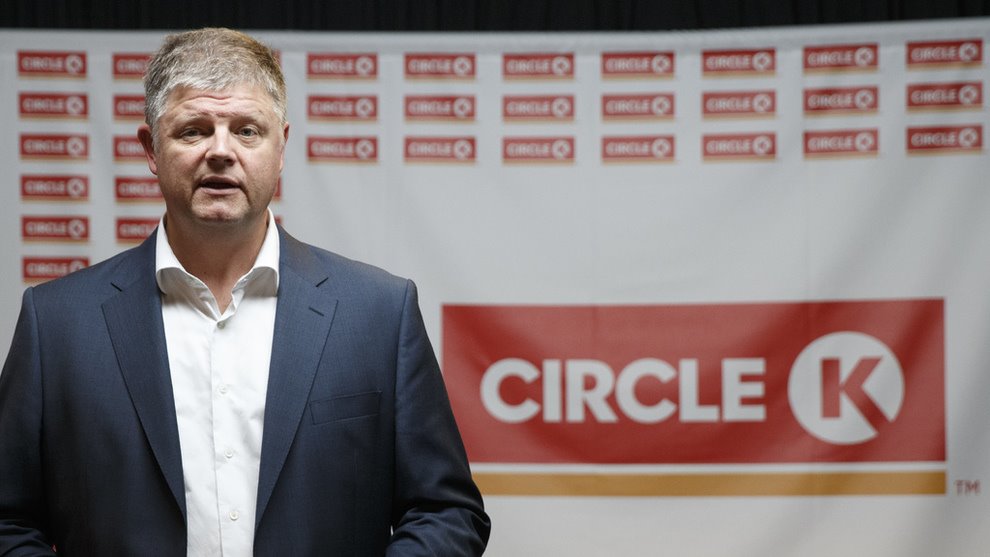 Norwegian-born Schram visited Ireland last week to kick-start a €20m rebranding of 420 sites from Topaz to Circle K following the fuel retailer's sale to the Canadian-listed firm in late 2015.

The rebranding exercise is about much more than giving a fresh lick of paint to a familiar brand, however.

Rebranding Topaz fuel canopies and Re.Store convenience stores to the Circle K brand is the easy part for Schram and his team. Future-proofing the forecourt retailer is a far bigger challenge.

As more and more consumers make the switch to buying electric cars - incentivised by government subsidies - and the rise of car-sharing and ride-sharing reduces the amount of cars on our roads, fuel retailers are being forced to reinvent their forecourts - and their own futures.

Schram's message is simple: Ireland's fuel retail sector is about to undergo a massive transformation, and if filling stations don't invent the future they'll be history.

Pulling up to pumps and filling your car with fossil fuels will soon become a thing of the past.

France intends to ban the sale of all petrol and diesel cars by 2040. Manufacturer Volvo has pledged to stop making them by 2019. Ireland has set a target of 10pc for all vehicles to be electric-run by 2020.

Britain plans to end sales of conventional petrol and diesel cars by 2040. More than 50pc of cars sold in Norway last year were electric or hybrid vehicles.

Even more market disruption lies up ahead. The arrival of driverless commercial fleet vehicles will render food and toilet pit-stops - an important source of income for motorway stations - unnecessary.

Forecourt retailers face a number of short-term challenges, too. Infrastructure needs to be built to support the trend towards electric vehicles. Currently, there's a mish-mash of different charging providers and operators, and different brands have different sockets and connections.

There are teething problems whereby there's no guarantee that the station you pull up to will have a source of electricity that's in your price plan, with a socket that works with your car.

But change is coming - and it's speeding up the fast lane. So what will forecourts look like in the future? "We will see electric cars become more dominant in Europe, but the shift won't happen overnight. We will continue to sell fuel for decades and it will continue to be a very important part of our business," said Schram.

Circle K currently operates a 'two-speed' business plan, whereby it continues to focus on fossil fuel but is pivoting towards electric car charging technology on its forecourts.

The plan is to create a network of high-power chargers (HPC) across Europe to enable long-distance electric car mobility.

"The initiative underscores Circle K's commitment to being a part of mobility solutions in our core markets. We want to make it easy for our customers to take part in the technology advancements, allowing fast charging for long-distance electric mobility for the first time," said Schram.

Ionity's network will consist of approximately 400 'super-charger' stations to enable long-distance travel in Europe across multiple countries. Circle K and Ionity will initially roll out 60 sites.

Each site will have on average six high-power charging points. Circle K will be the network partner in seven countries, including Ireland.

"You will still see fuel pumps but you will also see electric chargers on forecourt sites, that's for sure.

"You will probably also see high-speed chargers, whereby cars can be charged in five to 10 minutes' time. But you may have to pay more to use these super chargers," said Schram.

In addition to developing electric charging hubs at its forecourts, Circle K is eyeing the consumer market for car-charging products. This could become a big growth market for the company, as the vast majority of electric cars are charged at home, and as workplaces start to offer charging stations for their staff as perks.

"If we are going to play in this market we need to provide chargers to homes, workplaces, for garages, apartments, and some public places," said Schram.

With margins on petrol and diesel being razor-thin in recent years, forecourts have had to develop alternative revenue streams to fuel. It's the coffee dock and not the fuel pump where fuel retailers made most of their profit in the past decade.

"Ireland is at the cutting edge of forecourt and convenience retailing and we have big plans to build on the established position of the business in Ireland and bring our own global insights to the fore for the benefit of Irish consumers," he said.

Circle K is now exploring the idea of having small-format standalone convenience stores in urban areas as well as the possibility of rolling out a fleet of 'stores on wheels'.

Reflecting on the changes to the fuel retail industry in recent years, Schram said: "I used to say that in the last 100 years the customer has come to us but in the next 10 years it will be the opposite, that people will still come to our forecourts but we also need to go to the customer."