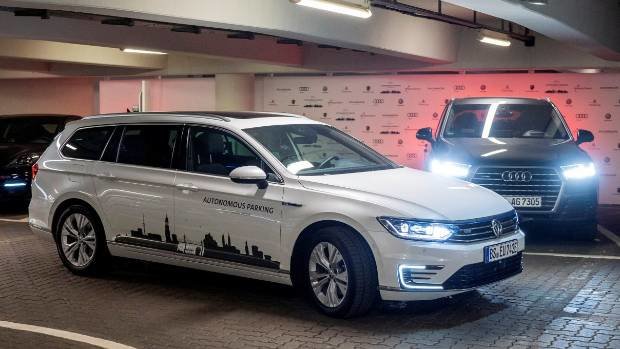 If you're a frequent traveller, this could be a dream come true: drive your car to the entrance of the airport carpark, then send it on its way - autonomously - to find a parking space while you go straight to check-in. This is happening right now as part of Volkswagen Group trial being run at Hamburg Airport in Germany. Based on a car park map, selected VW, Audi and Porsche vehicles can navigate their way to a parking space on their own.

Orientation is provided for them by simple pictorial markers installed in the multi-storey car park. The advantage of this simple system, says VW, is that it can be used in essentially any car park.

Once the trial and testing is finished, VW says this service will be available for the first customers in selected multi-storey car parks from the start of the next decade. 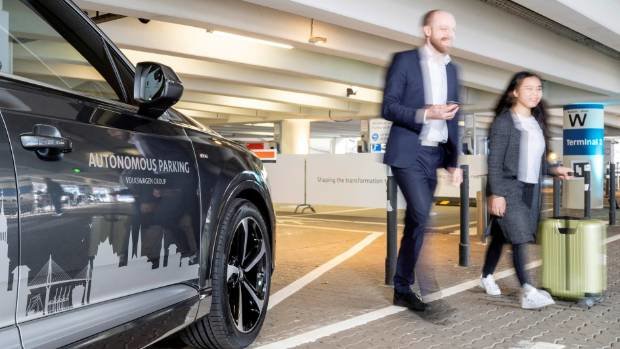 Johann Jungwirth, chief digital officer of the VW Group, says: "Autonomous parking can make an important contribution to creating convenient, stress-free mobility for our customers. We therefore want to democratise the technology and make it accessible to as many people as possible."

The service will be launched in stages. In the first stage it will be possible to use autonomous parking in selected multi-storey car parks in an exclusive traffic flow, in separate areas of the car park not accessible to people.

Before operation in exclusive traffic begins, the autonomous parking system is being extensively tested: thousands of parking procedures in different places around the world are being performed and analysed. Digital simulations are also part of the process.

The vehicles with the autonomous parking function will all be equipped with an "active surroundings recognition" system. This is able to recognise objects and react accordingly, be that by going around them, braking or completely stopping. Vehicles are equipped for this with a sensor set, including ultrasound, radar and cameras. The data is processed in a central control unit in the car.

In the multi-storey car park the car uses map data to drive on its own accord to a vacant parking space. Simple pictorial markers put up in the car park provide the vehicles with a means of orientation.

Another novel scheme being developed by VW in Germany is We Deliver. With this service users will in future have parcels that they order online delivered directly to their car. The service has already been tested in Berlin as part of a pilot phase. The car's boot acts here as the delivery address. The vehicle's position is given with the order.

The courier uses GPS data to pin down the location of the freely accessible parked car within a radius of 300 metres and is given one-time, secure access to the boot. The aim is that in future it is not just deliveries that will be possible. The intention is that couriers should be able to collect returns and franked parcels too.

Other VW Groups brands are developing their own bespoke services. An expansion of autonomous parking specific to Audi will allow a parked car to do a number of things for itself without the driver being present. If, for example, a travelling salesperson leaves an Audi in a marked area (called a Handover Zone), the car is able to drive autonomously to various service facilities, such as a car wash, a filling station or indeed a laundry service.

The Audi also finds a parking space itself and steers itself precisely to it. At the desired time it is back in the Handover Zone ready to continue the journey. The driver can track the car's actions at any time via an app and also add new services.

Meanwhile, Porsche has conceived a new system for its plug-in vehicles called Park & Charge."In public areas, and possibly even at home, charging robots will contribute to increasing the acceptance of electric mobility," says Uwe Michael, head of electrics/electronics development at Porsche.

"For the car gets not only automatically parked, but automatically charged as well. After going to a restaurant, for instance, the customer returns to a fully charged vehicle. At the same time, utilisation of the charging infrastructure is improved, because the car is only at a charging point for as long as it takes to be charged."

As soon as the electric car or hybrid model has parked up fully autonomously at a charging point, vehicle and charging robot communicate via WLAN.

The vehicle's charging cap is automatically opened, the charging robot's arm moves forward and establishes the connection between electric mains and on-board charger. Afterwards, the vehicle automatically parks in a different parking space, thus freeing up the charging point for the next electric car.