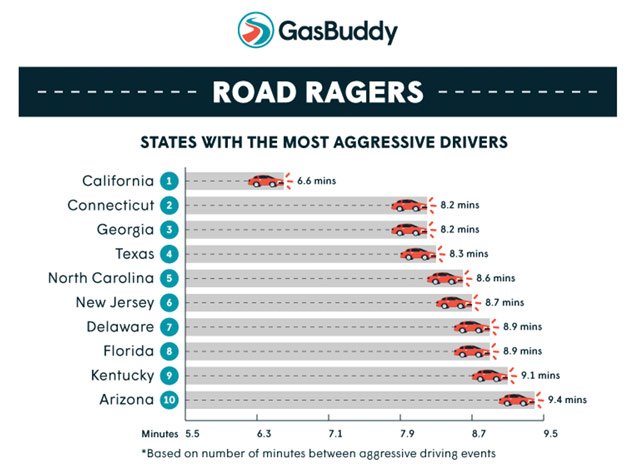 The report, released this week by GasBuddy, looked at aggressive driving habits such as speeding, rapid acceleration and braking.

Kentucky ranked ninth, just behind Florida and ahead of Arizona. California was the state with the most aggressive drivers, followed by Connecticut, Georgia, Texas and North Carolina. New Jersey and Delaware ranked sixth and seventh respectively.

Lawson said law enforcement writes many citations involving aggressive driving ranging for speeding to changing lanes aggressively. He added tickets can be as much as $200 for a simple speeding ticket depending on the city or county. Other infractions can lead to points on a person’s license or having a license suspended.

Lawson said drivers need to be aware of what other drivers are doing and to leave themselves more time when traveling.

“Aggressive driving is caused by someone who is typically in a hurry or you run into incidents of road rage and let that influence their driving,” he said. “It might not seem serious, but minor things can cause huge accidents on busy roadways and interstates.”

In addition to the higher risk for tickets or accidents, aggressive driving is the quickest way to waste gas and lower gas mileage, the report notes. The bad driving habit can cost drivers an extra $477 per year in fuel consumption.

“Our findings indicate that states with densely populated cities and high levels of congestion are where motorists are more inclined to drive aggressively,” said Patrick DeHaan, head of petroleum analysis at GasBuddy. “And with gas prices expected to continue to rise well into the summer months, simply being aware of how you drive can dramatically lower fuel costs, prevent damages to your vehicle, and make the roads safer for everyone.”

The findings were compiled using data from GasBuddy’s Trips feature that provides drivers with an assessment of their driving habits during their trip in an effort to improve fuel efficiency, mapping out when and where a poor driving habit occurred.

GasBuddy examined tens of millions of Trips in the 50 states since Dec. 12, 2017, noting the frequency of an aggressive event while driving, whether it be speeding, hard braking or accelerating.