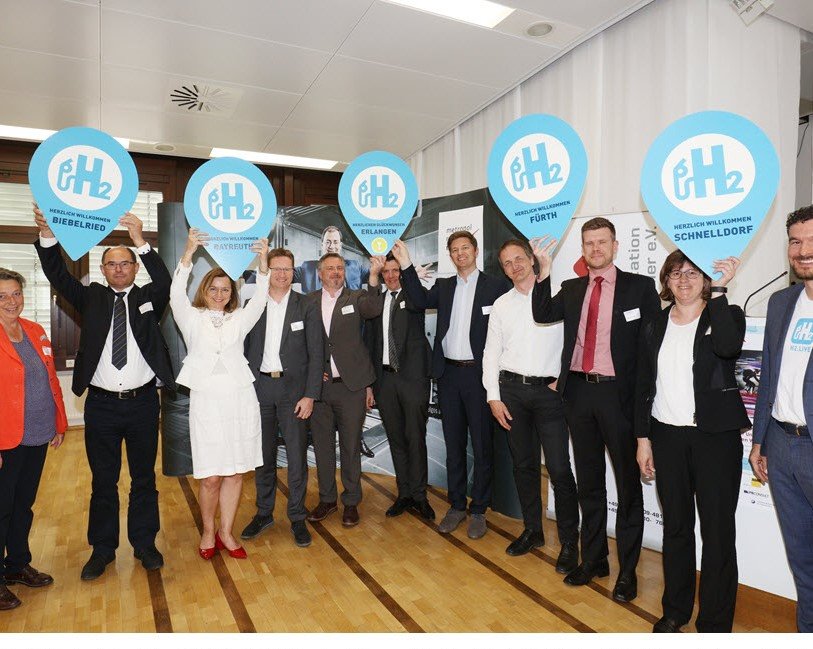 The Nuremberg metropolitan region will receive five more hydrogen stations at a single stroke: four (Bayreuth, Biebelried, Fürth and Schnelldorf) will be built as part of H2 MOBILITY’s regular network planning, while a fifth location – Erlangen – has successfully prevailed in the second appeal to regions, with 20 declarations of intent to purchase hydrogen cars and an integrated concept for hydrogen generation and storage.

This means that hydrogen pioneers in the region will soon be able to refuel at a total of eight locations in Nuremberg and the surrounding area.

H2 MOBILITY Deutschland GmbH & Co. KG issued its second appeal to regions to apply for a hydrogen filling station. At least 15 signed LOIs (Letter of Intent) for the purchase of a hydrogen-powered vehicle were considered a prerequisite. In all, more than 400 LOIs were submitted by companies and individuals from 13 regions.

“Erlangen convinced us primarily with its integrated concept,” says Lorenz Jung, who lead-managed the call and is responsible for the roll-out of filling stations at H2 MOBILITY. “We are planning the hydrogen filling station on the Siemens AG campus, and will benefit from the many activities in the field of hydrogen generation and storage that are being established here.

Among other things, Siemens will operate an electrolyser powered by a PV system, for generating hydrogen from renewables. Hydrogenious Technologies will demonstrate the recovery and supply of hydrogen from delivered LOHC using a ‘release box’. We also enjoy the support of the city of Erlangen and the municipal utilities, which signed letters of intent to purchase hydrogen cars in response to the appeal to regions.

In accordance with the network plans, the Nuremberg metropolitan region will also get four other stations in addition to Erlangen – in Bayreuth, Biebelried, Fürth and Schnelldorf. The stations will be integrated into existing TOTAL, Shell and OMV service stations. The technology comes from the plant and gas manufacturers Air Liquide and Linde. H2 MOBILITY is already building a station in Berg near Hof, and hydrogen filling stations have already opened in Nuremberg, Langwasser and Geiselwind.

This means that the alternative fuel hydrogen will be available at eight locations in and around Nuremberg.“The Nuremberg Metropolitan Region will play a purposeful role in shaping the mobility shift. We want an energy and transport transition towards zero-emission drives and will support the technical options as best we can. Fuel cells using hydrogen play an important role.

We are pleased about H2 MOBILITY’s commitment to expending the hydrogen filling station network, and want to do our part to ensure a rapid development of hydrogen mobility in our region,” commented Prof. Dr. Klaus L. Wübbenhorst, Chairman of the Nuremberg Metropolitan Region.