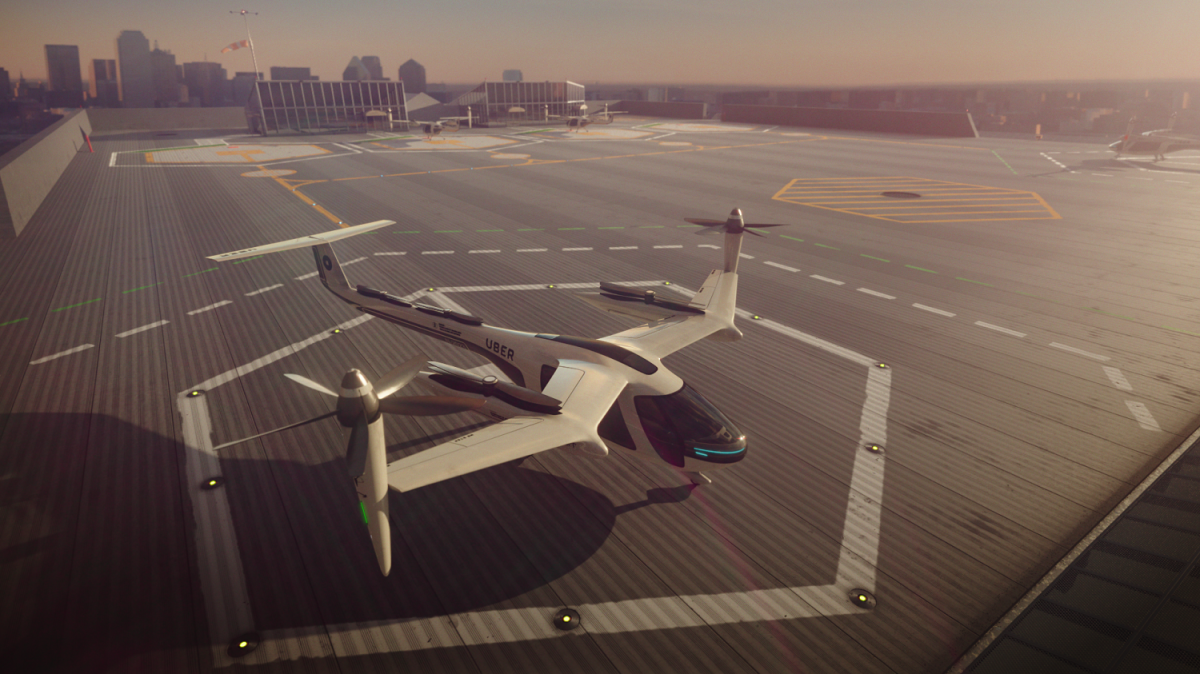 Uber Technologies Inc. on Tuesday unveiled its drone-like, all-electric flying car concept, aiming to get the world’s first air-taxi service off the ground within the next few years.

Privately held Uber shared the design specifications of the aircraft, officially called electric vertical take-off and landing vehicles, or eVTOL for short, to encourage more air-taxi concepts and to foster technologies for the development of an air-taxi rideshare network, the company said. Uber’s concept aircraft, which owes its look more to drones than helicopters, was designed with “a rider-first mentality,” Uber said.

The aircraft’s blades are as high as possible to leave room to board and de-plane with no ducking. Its wings provide shade and protection from rain. Riders would get in on one side, minimizing confusion and simplifying ground-crew operations. The aircraft is designed for four passengers, “allowing riders to board/de-plane easily and avoid the dreaded middle seat,” Uber said.

What’s more, the company said that after “several years,” an air-taxi ride would cost about the same as an UberX trip of the same distance. UberX is the company’s lowest-cost private ride.

The air-taxi unveiling was a spot of good publicity for the ride sharing company, which has been under a cloud since one of its self-driving cars struck and killed a pedestrian in Tempe, Ariz., in March. Uber has suspended its robo-taxi program while the investigation into the crash continues.

For this venture, Uber plans to operate “a network of small, electric, aircraft in numerous cities worldwide to enable four-person ride-sharing flights in densely populated urban markets,” the company said. Initially the aircraft would be piloted, but will become autonomous and the aircraft is designed for “safe transition between vertical and forward flight,” Uber said.

Four sets of stacked propellers, which have the potential for being quieter, are dedicated solely to takeoffs and landings. Once the eVTOL gets to its desired altitude, a propeller on the tail would provide thrust for going forward.

Cruising speeds would be around 150-200 miles an hour, and the aircraft would be able to fly 60 miles on a single charge, Uber said. Recharging time would be about five minutes. Uber last year said the first U.S. cities to get its air taxis would be Los Angeles and Dallas and surrounding areas, with flight demos expected in 2020 and flights expected to be commercially available by 2023 in those cities.

Uber has partnered with aircraft makers that are developing eVTOLs, such as Boeing Co.’s BA, +2.33% Aurora Flight Sciences and Embraer SA. ERJ, +1.88% NASA separately said Tuesday it was signing a second agreement with Uber to “further explore concepts and technologies related to urban air mobility.” Uber will share its plans for an air-taxi rideshare network and NASA will use its latest in airspace-management computer modeling and simulation technologies to assess the impact of the small aircraft in crowded areas.

“Urban air mobility could revolutionize the way people and cargo move in our cities and fundamentally change our lifestyle much like smart phones have,” said Jaiwon Shin, with NASA’s Aeronautics Research mission Directorate, in a statement.

The company first sketched plans for air taxis and on-demand urban aviation in 2016. Riders would get faster service, one that would save lots of commuting time and not be limited to fixed routes, Uber has said.

The development of a network of landing and takeoff pads on repurposed parking-garage tops, existing helipads, and land surrounding highway interchanges would be cheaper than building roads, rail, bridges and tunnels, it said.