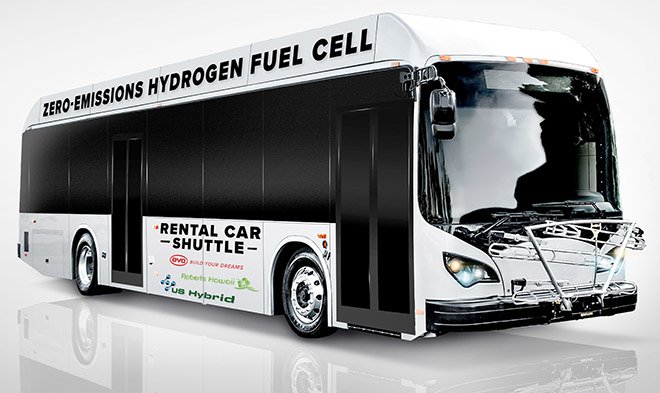 BYD the biggest electric vehicle manufacturer in the world the has teamed with US Hybrid Corporation, a 20 year industry leader, to develop a hydrogen fuel cell battery-electric bus. This bus, the first of its kind, will serve Honolulu’s Daniel K. Inouye International Airport, one of the busiest airports in the United States with more than 21 million passengers per year.

The new bus is being developed as part of Hawaii’s Clean Energy Initiative (HCEI) to meet sustainable energy objectives of decreasing dependency on imported oil and reducing greenhouse gas emissions.

The initiative is a central component of the state’s goal to be powered 100 percent by renewable energy by 2045. Robert’s Hawaii, the state’s largest employee-owned tour and transportation company, will serve as the bus operator, shuttling passengers between the airport’s terminal and car rental facility.

The bus will utilize BYD’s battery-electric platform, integrating hydrogen fuel cell technology to eliminate operational dependency on charging. “We are ecstatic to partner with US Hybrid. Together, we can bring innovative ideas to the state of Hawaii and deliver clean, renewable transportation solutions,” stated Macy Neshati, senior vice president of BYD Heavy Industries.

Hawaii is positioned as a global powerhouse for the advancement of hydrogen and other alternative fuels. The Federal Highway Administration has designated multiple alternative fuel corridors with electric vehicle chargers or hydrogen fuel stations.

Additionally, as part of an agreement between the Air Force Research Laboratory and the Hawaii Center for Advanced Transportation Technologies, the U.S. Air Force has been demonstrating hydrogen as an alternative fuel at Joint Base Pearl Harbor-Hickam.

“With the state aggressively pursuing clean power, we have an ideal backdrop to showcase the most efficient zero emission technology in the industry. The fusion of US Hybrid’s fuel cell technology and BYD’s electric bus platform will shape the future of Hawaii and ultimately, change the world,” said US Hybrid founder, Dr. Abas Goodarzi, Ph.D., P.E.

The bus is manufactured in Lancaster, California and fuel cell made in South Windsor, Connecticut.