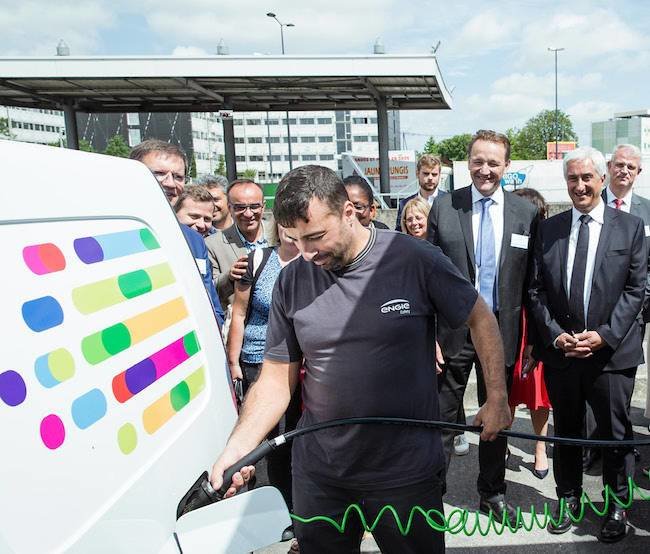 France-based ENGIE is best known for its leadership role in distributing, storing and importing natural gas in Europe. So, when the company launched a fleet of 50 hydrogen fuel cell utility vehicles last week, it would be natural to assume that the hydrogen is coming from the usual source, namely, natural gas.

Guess again. The project comes under the umbrella of one of ENGIE’s numerous subsidiaries, ENGIE Cofely, which is centered on energy efficiency and sustainability. If the fleet is a bottom line success, it could be the beginning of a long, slow — or rapid, as the case may be — global transition to renewable hydrogen.

For those of you new to the topic, fuel cell EVs run on electricity, just like their battery-powered cousins. The difference is that fuel cells generate electricity on board through a chemical reaction between hydrogen and oxygen. If that on-the-go factor sounds like an advantage over today’s generation of battery EVs, it is. A tank of hydrogen takes minutes to fill up, far faster than a typical full battery charge.

On the downside is that thing about natural gas, but with the advent of low cost renewable energy, fossil hydrogen could be on the way out. Among the many pathways to renewable H2 is electrolysis, in which an electrical current is used to “split” water. The new fuel cell EV fleet will consist of 50 hydrogen Renault Kangoo vans, which ENGIE Cofely will deploy to service buildings it has under contract in the Ile-de-France.