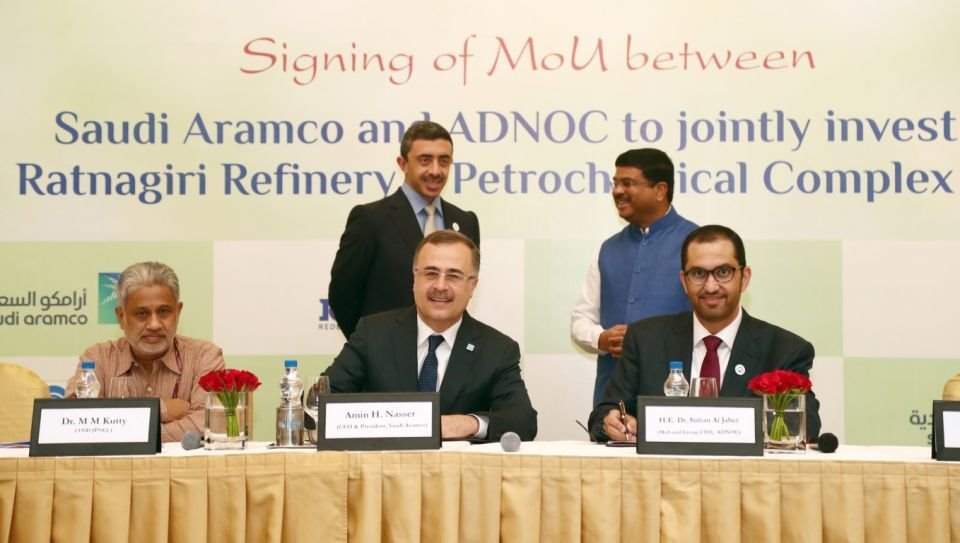 The deal will involve a strategic partnership and co-investment in the development between all parties. Aramco and ADNOC will jointly own 50% of the new joint venture - Ratnagiri Refining and Petrochemical Company Ltd - with the remaining 50% owned by the Indian Consortium.

Indian oil minister Dharmendra Pradhan spoke last month about securing support from the Gulf-based oil giants – ADNOC and Aramco – for the ambitious project, which is expected to come on stream by 2025. Sheikh Abdullah, UAE Minister of Foreign Affairs and International Cooperation, said the agreement strengthen the ties between the three countries.

“The UAE is unwavering in its commitment to its strategic multi-lateral relationships with both Saudi Arabia and India, as well as being a reliable partner in India’s energy security. We look forward to exploring further opportunities to expand our energy partnerships and to collaborating on new, broader, opportunities that will further strengthen and deepen the long-standing economic links between our three countries,” he said.

Dr Sultan Ahmed Al Jaber, UAE Minister of State and ADNOC Group CEO said project is a clear example of ADNOC’s plan to expand its downstream strategy “where we will make strategic, commercially-driven, targeted investments, both in the UAE and abroad”.

“By investing in this project, we will secure off-take of our crude to a key growth economy, as well as one of the world’s largest and fastest growing refining and petrochemical markets,” he said. Amin Nasser, Saudi Aramco President and CEO said the project will help ensure that the world’s fastest-growing economy has secure, reliable energy for its long-term prosperity.

“The Ratnagiri project will meet India’s rising demand for fuels and chemical products while serving the strategic objectives of the partners,” said Nasser. “I am pleased that Saudi Aramco will deepen its engagement in India’s fast-growing oil and gas sector through this project that also positions us for future collaboration as a key element of our company’s global downstream strategy.”