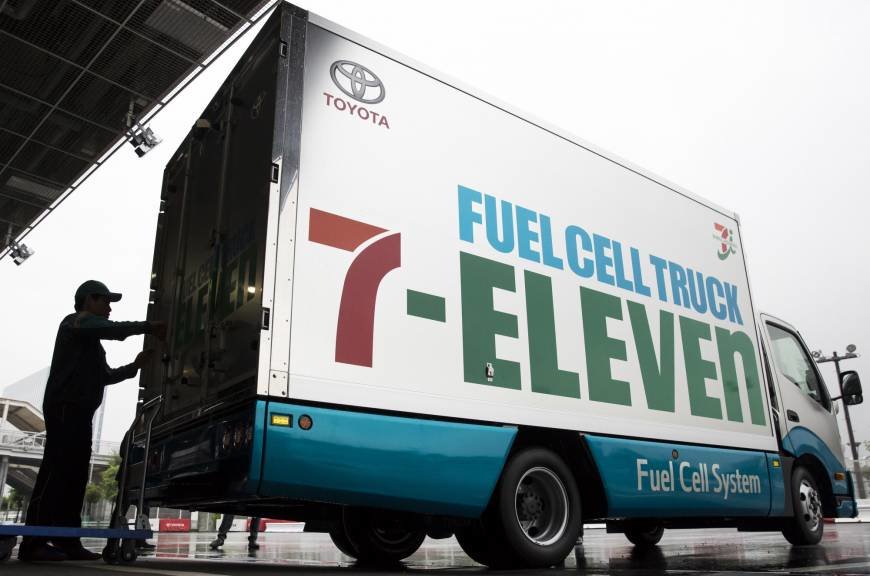 Seven-Eleven Japan Co. and Toyota Motor Corp. are joining forces to make convenience stores friendlier to the environment by using fuel-cell trucks for deliveries with the aim of popularizing the eco-friendly vehicle. Toyota has expertise in the development of fuel-cell cars that run on hydrogen and do not emit exhaust fumes, while Seven-Eleven Japan has more than 20,000 stores in the nation.

Fuel-cell trucks are expected to be introduced from next spring at Seven-Eleven outlets, helping drastically spread the use of what Toyota calls the “ultimate eco-friendly vehicle” in the country at a time when sales of that type of car remain sluggish.

“We are looking to introduce fuel-cell trucks in all areas across Japan in the future,” said Kazuki Furuya, president of Seven-Eleven Japan, at a news conference on June 6. Seven-Eleven and Toyota unveiled a small fuel-cell truck with a load capacity of 3 tons on the same day in Tokyo. The newly developed truck uses the same type of fuel-cell as Toyota’s Mirai passenger car, released in 2014, and will use electricity generated from hydrogen to keep the products in the back of the truck cold.

Under the plan, Seven-Eleven will introduce two fuel-cell trucks for use in the Tokyo metropolitan area to deliver sandwiches, milk-based drinks and other refrigerated products to a store with a hydrogen station in Tokyo’s Ota Ward and other outlets. While the fuel-cell trucks can cover 200 kilometers a day, they can also provide electricity to Seven-Eleven shops during times of natural disasters.

Seven-Eleven uses 6,000 trucks across the nation for deliveries. Whereas eco-friendly vehicles account for more than 15 percent of them, the convenience store chain aims to raise the ratio to 20 percent by 2020. Fuel-cell trucks can run longer distances and be filled up with fuel quickly, making them more efficient than electric cars.

The joint effort is also expected to give Toyota, which describes its fuel-cell cars as the “ultimate eco-friendly vehicle,” a burst of momentum. While the commercial launch of the Mirai gave Toyota a head start on other automakers developing comparable vehicles, the fuel-cell model is priced at more than 7 million yen ($63,500).

In addition, there are only 100 hydrogen stations across Japan, although there are thousands of fuel stations for other green vehicles. Due to those factors, fuel-cell cars are much less popular than other cars. While domestic sales of gas-electric hybrids, plug-in hybrid vehicles and electric cars were 1.38 million units, 36,000 units and 18,000 units, respectively, in 2017, only 800 fuel-cell vehicles were sold that year, according to the economy ministry and other sources.

Toyota now holds high expectations for trucks and buses. As those vehicles operate on predetermined routes, it is said to be easier for truck and bus operators to introduce fuel-cell vehicles for their businesses. Toyota in March marketed its fuel-cell bus Sora, which has been adopted by the Tokyo metropolitan government for its metropolitan bus services. The automaker is also conducting tests of a large fuel-cell truck in the U.S. West Coast.

Shigeki Tomoyama, an executive vice president of Toyota, said June 6 that Toyota has high hopes for the joint project with Seven-Eleven to promote its fuel-cell cars. “There are limitations to selling fuel-cell passenger cars alone,” he said. “The nationwide convenience store chain’s introduction of our trucks will offer great potential.”

Meanwhile, Toyota and Seven-Eleven are also planning to work together to make convenience stores more energy-efficient. Under the plan, not only fuel-cell generators will be introduced, but also special storage cells based on hybrid car batteries that can store electricity produced from solar power will be put into practical use at Seven-Eleven’s “next-generation outlets,” starting in autumn 2019.