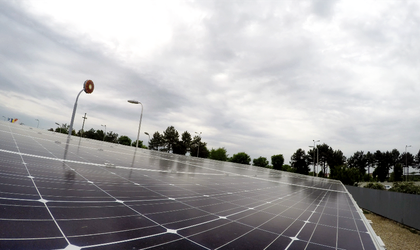 Rompetrol Downstream, the retail division of the KMG International Group, recently completed the fitting of the first Rompetrol gas station with high-capacity solar panels, a premiere for Romania and the Black Sea region.

“This is an idea that we have been analyzing for at least three years, but which has become viable with technological developments and factors such as the necessary surface, costs / investments, effectiveness, efficiency and, last but not least, the legislation in the field. It is a pilot project that will provide us with all the necessary information for its possible expansion to other Rompetrol stations in Romania.” said Vlad Rusnac, Chief Retail Officer of KMG International and General Manager of Rompetrol Downstream.

The chosen location for the implementation of this project was the Rompetrol station located on the Bucharest ring road and near the fuel depot in Mogosoaia. In 2013, this station became the natural-sized laboratory of the company where the new concept of Rompetrol stations (ambiance, colour combination, means of communication, etc.) has been developed and tested, and which is presently at the level of the Group’s fuel distribution networks in Romania, Bulgaria, the Republic of Moldova and Georgia.

With a lifetime of at least 25 years, the plant has a maximum power of 20 KVA and is sized so that the energy produced is consumed entirely in the fuel distribution station. In case the power consumption of the station will sometimes be lower than the minimum powers average (registered at the design / study stage), then it is possible to use it for the Mogosoaia depot or to be delivered to the national power grid.

The photovoltaic panels are provided with a system that continuously guides the light source providing maximum output, producing 44% more energy compared to a static system. They also have winter defrosting functions and a built-in strong wind protection system

In addition, the system also includes two last generation inverters, which have a 97.6% efficiency and built-in protection devices (short-circuit protection, differential protection, insulation monitoring and protection against insularized operation). In the first quarter of 2018, Rompetrol Downstream has obtained a total fuel sale volume of around 490,000 tons, a level similar to that achieved in the similar period of 2017, influenced by severe weather conditions in March.

Out of this quantity, approximately 30% was traded through the Rompetrol stations, this index indicating a 3% growth compared to last year’s similar period. At the end of March, the distribution segment of the company comprised 818 fuel trading points (own stations, partner stations, mobile stations, internal bases of 9 and 20 cubic meters), 66 more units compared to March 2017.