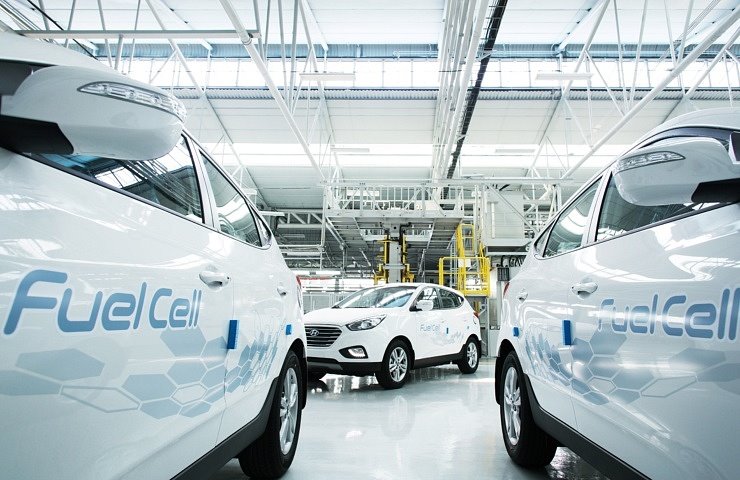 In June, the Ministry of Industry, Trade and Energy announced a 2.6 trillion won plan aimed at supplying 16,000 units of vehicles powered by hydrogen and building 310 refilling stations across the country. Under the five-year-plan, businesses are expected to get the state support for the development of fuel cell stacks and fuel cell storage containers -- crucial for hydrogen transport system -- as well as tax breaks for hydrogen vehicle drivers.

The announcement is a follow-up to a pan-industrial alliance launched in April. The ministry signed a memorandum of understanding with local automakers, state-run utilities companies and related organisations to establish a special purpose company to build hydrogen fueling stations in major cities and on highways.

“In the next five years at least, you will see more hydrogen cars as much as battery-driven electric cars,” said Park Jong-won, automobiles and aviation dept. of the Ministry of Industry, noting that they are complementary, not rivals. About 25,500 electric vehicles are registered in South Korea, with the number projected to grow up to 350,000. There are only 170 hydrogen powered vehicles currently registered here.

“Currently, South Korea is one of the leading countries in fuel cell electric vehicle (FCEV) technology which is yet taking a small portion both in domestic and global market,” said Ryan Lee, principal analyst at IHS Markit.

“However, the investment will accelerate popularizing FCEVs with more realistic numbers of charging infrastructure (only 11 FC charging stations in Korea currently) and sufficient subsidy support,” he said. But the South Korean government’s focus appears to be limited to auto industry and is far from being comprehensive, experts say.

In a hydrogen economy, vehicles would play a crucial part. But more comprehensive work has to be carried out -- such as building nationwide networks of energy supply and storage system, which cost a lot of money and require a “very” high level of technology.

By 2020, the year the country hosts the Tokyo Olympics, Japan plans to increase the number of hydrogen-powered vehicles by 40,000 units and 800,000 units by 2030. Under its 2014 road map toward a hydrogen economy, not only car makers that have already succeeded in commercial production of fuel-cell electric vehicles, but also other traditional industrial players -- energy firms, steelmakers and shipbuilders -- have formed an alliance to switch to hydrogen energy.

Japan has currently 97 hydrogen filling stations across the country. The number is set to grow to 160 by 2020 and 900 by 2030. Under its grand plan, Japan will build massive electrolysis plants in Australia and the Middle East, and transport them back to Japan on vessels designed to store and carry hydrogen.

Germany has also set a long-term project in 2007 to take the lead in fuel cell technology, while participating in a joint project by EU-member countries aimed at testing efficiencies of hydrogen-powered vehicles and pushing for the commercialisation of the green cars. By 2023, Germany plans to operate 650,000 fuel cell electric vehicles and 1.8 million by 2030.

“Energy transition from fossil fuels to hydrogen is more complex, more than many would think,” Ahn Kook-young, chairman of the Korean Hydrogen and New Energy Society, stressing that the transition is equivalent of the introduction of the internal combustion engine in the 19th century’s.

“Building hydrogen infrastructure will take years of effort, money and political consideration,” he said. It cost around 3 billion won to build a hydrogen refilling station, compared to 200 million won for a gasoline station, he added.

Still, South Korea keeping its hydrogen dream has a point. “The world of hydrogen is still unknown, but we are standing on the path toward the hydrogen economy,” said Shin Jae-haeng, the head of H2Korea, a think tank under the Ministry of Energy. “The government is determined to complete its goal on climate change to comply with the global consensus on reducing emission."