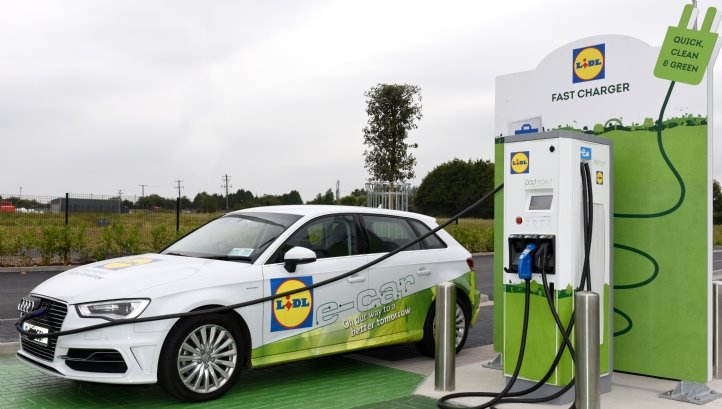 Budget supermarket chain Lidl has announced that it will install electric vehicle (EV) chargers at 20 of its stores across Ireland over the next six months, in a bid to host the nation's largest supermarket-based network of chargepoints.

The company is investing more than £133m (€150m) in the infrastructure project, which will see at least 40 EV chargepoints installed by February 2019, following successful trials of the technology at its stores in Rathfarnham, Drogheda and Swords.

The chargers will be retrofitted at 10 Lidl stores and incorporated into the design of seven new stores currently in development. The chargepoints will be free for customer use and will provide an average 100km of driving range per charge, Lidl said in a statement. “Electric vehicles are indispensable in addressing the major challenges of improving air quality and curbing the use of fossil fuels,” Lidl Ireland’s director of property and central services, Alan Barry, said

“With more and more customers shopping with us every week, we hope that the expansion of the network of public charge points will make EVs more attractive to customers whilst further enhancing our customer experience.” The move to expand Lidl’s EV charging network comes after Ireland updated its national climate-mitigation plans to include a target of increasing the number of EVs on Irish roads to 500,000 by 2030.

Government figures have revealed that transport accounts for a third of the nation’s CO2 emissions and energy requirements. Lidl’s announcement was praised by the Sustainable Energy Authority Ireland’s chief executive, Jim Gannon, who said the supermarket would provide a “welcome” addition to Ireland’s EV charging infrastructure as sales of the vehicles increase.

“While we recognise that the majority of charging may take place at home, initiatives such as this from Lidl will help to provide confidence in the charging network and ensure that there are sufficient charging locations available for a growing number of electric vehicle users,” Gannon added.

Charging ahead Bloomberg New Energy Finance (Bloomberg NEF) has predicted that EVs will account for more than half of new car sales by 2040. However, the research noted that the pace of the EV revolution could be hindered by far slower investment growth in infrastructure.

Similarly, the Department for Transport has identified a lack of charging infrastructure as one of the three biggest barriers to EV adoption in the UK, along with distance travelled per charge and vehicle cost. Elsewhere, the Committee on Climate Change estimates that nearly 29,000 charging points are needed across the UK by 2030 to meet future EV charging needs.