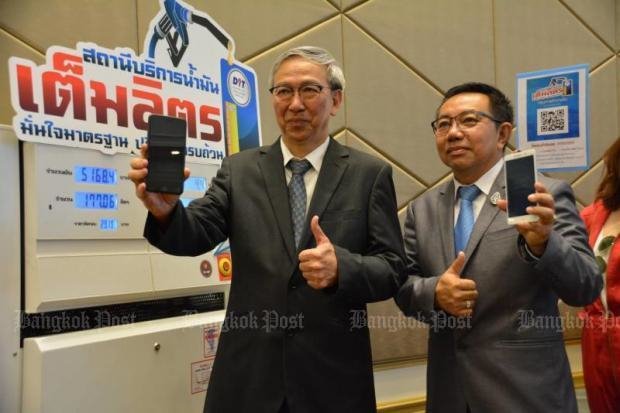 The Commerce Ministry has launched "full-litre petrol" mobile apps to assure motorists that the petrol stations where they fill up are trustworthy. According to Commerce Vice-Minister Sakon Varanyuwatana, the apps will help buyers identify 3,700 verified petrol stations across the country, as well as the locations of liquefied petroleum gas and natural gas for vehicle (NGV) stations, convenience stores, bank branches and ATMs.

"The new applications aim to accommodate the lifestyle of the new generation that is fond of speed, convenience and sophistication," Mr Sakon said. "Easy-to-use applications will tell us the locations of the petrol stations, especially those which are qualified by the Commerce Ministry as full-litre petrol stations. This will help cut commuters' travelling time and benefit consumers overall."

The full-litre petrol apps can run on iOS or Android and are available at Apple's App Store and Google's Play Store. Mr Sakon said the Commerce Ministry's Internal Trade Department initiated the full-litre petrol station programme in 2003 by encouraging both tank farm operators and oil retailers to join the scheme. In the scheme, the Internal Trade Department will from time to time inspect the oil flow meters of the petrol stations to ensure their quality standards and build up consumer confidence as well as prevent any possible fraud.

Some 3,700 petrol stations from all brands are participating in the programme out of more than 6,000 stations on the country's main roads nationwide. Periodic complaints have been filed by consumers. For instance, at a recent event, some retailers were accused of cheating by selling E20 gasohol, a 20% ethanol blend with 80% of petrol, as E10 gasohol because the former is 2-2.50 baht cheaper.

Others allegedly cheat by selling fuels with Euro 2 or 3 emissions standards in the domestic market, but the standard in Thailand is Euro 4, which is higher in quality and price. That helps profiteers gain 50-70 satang per litre. Total profit from these scams could be several million baht, the Department of Energy Business said earlier.