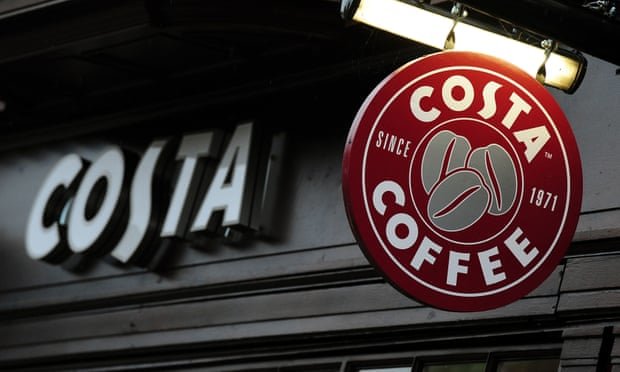 The soft drinks giant Coca-Cola is buying the Costa Coffee chain in a near-£4bn deal that underlines the scale of the global coffee revolution.

The takeover will overnight turn Coca-Cola into the UK’s biggest coffee shop player and give it a foothold in what is one of the world’s fastest-growing drinks categories. The global coffee shop market alone is worth $165bn (£127bn).

Alison Brittain, the chief executive of Costa Coffee’s owner Whitbread, said the coffee chain had been approached by a number of potential buyers but Coke’s desire to snap up the 4,000-store chain was a “dream deal” for investors. Whitbread, which also owns the Premier Inn hotel chain, bought Costa from its founders Sergio and Bruno Costa for £19m in 1995 when it had only 39 shops.

Shares in the UK group soared on the back of the deal, closing up more than 16% as delighted investors responded to the much higher than expected sale price. “The other suitors weren’t wearing the right suit or driving the right car,” explained Brittain of the other approaches it received. “It’s Coke we decided to go up the aisle with, with a very large ring on our finger.”

The takeover is the latest in a series of blockbuster deals as drinks manufacturers reinvent themselves for an age in which the sugar-laden soft drinks that made their names are in decline. PepsiCo recently bought the fizzy drinks maker SodaStream while the Swiss food giant Nestlé has struck a $7.3bn deal to license Starbucks-packaged coffees and teas around the world.

The UK could be nearing peak coffee, however, with the number of shops growing from 10,000 in 2007 to 24,000 today, according to analysts at Allegra World Coffee Portal. There are nearly twice as many Costa Coffee branches in the UK as there are Starbucks and almost four times the number of Caffè Neros.

For Coca-Cola the prize is a global one, as demand for coffee grows at 6% a year, far ahead of its traditional soft drinks heartland where sales are under pressure as consumers seek out healthier drinks. In potentially huge sales markets such as China, the coffee culture is still in its infancy.

When the deal completes in the first half of next year Coke will own 4,000 Costa stores in 32 countries, with more than 2,400 of those in the UK, as well as more than 8,000 self-serve Express machines. Angus Grierson, the managing director of the advisory firm LGB Corporate Finance, said the lightning speed the deal was done – it was brokered in five weeks – reflected the urgency with which Coca-Cola wanted to reduce its reliance on sugary drinks.

“The deal is an attempt to adapt quickly to changing tastes, notably the continuing rise in popularity of coffee, particularly among millennial consumers,” Grierson said. “Customers are choosing lower-sugar varieties of soft drinks more than they ever have, with sales of sugary drinks declining rapidly, down 11% in 2018, thanks in part to the introduction of the UK’s first-ever sugar tax.”