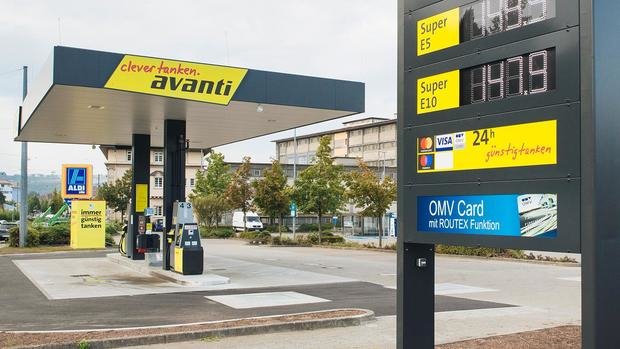 In Austria, the cooperation between FE-trading and the local Aldi-offshoot Hofer has been running since 2009. Almost a year ago it was announced that the Alpine tank model should also be tested in Germany. Now the fuel experiment has started. Quite Aldi-like without any ceremony, the first Aldi petrol stations were put into operation in Ludwigsburg in Baden-Württemberg and in the nearby Stuttgart-Obertürkheim in August.

Even from afar, the bright yellow Obertürkheim is recognisable for "clever refuelling. Avanti "advertises. Behind it the Aldi-Süd logo shines. When the Austrian Aldi-offshoot Hofer started in the year 2009 in Salzburg and lured with a diesel price of 50 cents, a record-breaking long queues formed in front of the fuel pumps. They don't exist in Obertürkheim. But the customer of the cheap fuel seems to have already spread here too.

Apart from fighting prices, Aldi and Avanti rely on the convenience of customers who want to use the services of different providers in one place. "For petrol station tenants this can have dramatic consequences" The idea is not new. Already in the early nineties, for example, the supermarket chain Allpurchase tried to score with its own petrol stations near its

The discounter will "lease parts of the land area to Avanti Deutschland at ten locations in Greater Munich, Nuremberg and Stuttgart," the company officially announces. If the locations prove themselves, Fe-trading is expected to octane rapidly in the expansion of Germany. In the long run 200 vending stations were planned, the "Wiener Zeitung" reported.

With this number, the Aldi network would be among the 15 largest petrol stations in Germany. According to the Energy Information service in Hamburg, which regularly determines the number of establishments, the two oil giants Aral, with around 2300 and shell, operate the largest number of petrol stations in Germany, with a total of just under 2000. Aldi partner OMV operates 270 tapping points.

In the industry, the plans are worrying: "For service station tenants whose operations are located in the catchment area of the Aldi tank machines, this can have dramatic consequences," says Thomas Drott, managing director of the federal gas stations and commercial car Wash. "There is a risk of job losses, especially at smaller fuel stations."

Regardless of the cooperation with FE-trading, the expansion of charging stations for electric cars in Aldi Süd is progressing. Up to now there are 53 free charging stations in front of the nationwide 1890 branches. By the end of 2018, the company wants to offer "more than 80 charging towers for electric cars". The electricity for this is produced by solar systems on the roofs of the respective branches.

Also in Stuttgart-Obertürkheim a blue marked parking area invites E-car drivers to "soak up the sun". Alone, the charging station is rarely used, other than the four dispensers a few meters away. Every few minutes a car stops in front of the Avanti machines. The cheap gasoline business is running.