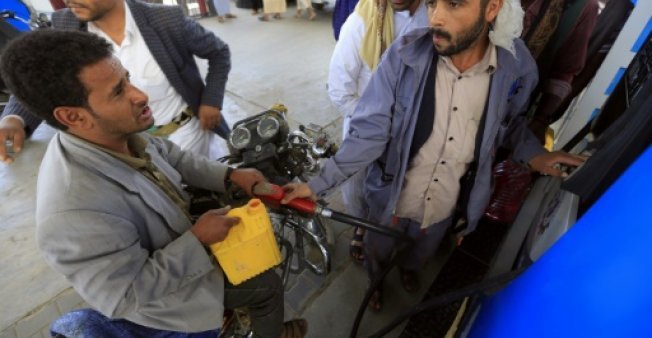 Taxi driver Fahed Othman has been waiting to fill up at a petrol station in the Yemeni capital for two days, but when his turn finally comes the fuel has run out.

"I don't have any other choice but to wait," the 35-year-old told AFP wearily. Hundreds of Yemenis queue up at petrol stations every day in the rebel-held city of Sanaa, with residents increasingly frustrated by deteriorating living conditions after more than three years of war.

The conflict, deepened by a Saudi-led blockade, has triggered crippling shortages, which in turn has caused prices to skyrocket. Cooking gas, diesel and petrol have all increased by more than 25 percent since November 2017, according to the UN's humanitarian agency (OCHA).

While the Huthi rebels accuse the Yemeni army and its Saudi-led allies of blocking fuel supplies, others say rebel authorities and merchants are taking advantage of the dire situation to make a quick buck.

Sanaa resident Ahmed al-Rawdi, pointing to a petrol station behind him, said the pump had been closed because those who run it claimed to have no more fuel. "Merchants are trying to exploit the situation by storing the fuel to sell it (for more money) on the black market," he said. "They are just saying that there is no more petrol. But the tanks are full."

Huthi authorities said Tuesday that there have been fuel shortages over the past couple of days, as Saudi-backed government forces launched a series of attacks on the rebel-held Hodeida ending an 11-week pause in the battle for vital port. In November the Saudi-led coalition announced a total blockade on Hodeida following a rebel missile attack that targeted Riyadh.

That embargo was eased under international pressure, with aid groups sounding the alarm. But the Red Sea port remains a vital lifeline for aid and fuel shipments into Yemen, the most impoverished Arab country.

Sanaa resident Saddam Ghaleb said the problem "is not that fuel cannot be transported from Hodeida city, because petrol is available on the black market." "It is the authorities that want to ignite a crisis so that they raise the price of fuel," the 28-year-old told AFP.

In a stark warning, the charity Save The Children said Wednesday more than five million children were at risk of famine in Yemen, and highlighted the fate of Hodeida. Apart from reducing food supplies, any "disruption (to the port) ... could drive up the price of fuel ? and as a result transport ? to such an extent that families can't even afford to take their sick children to hospital," said the organisation's CEO Helle Thorning-Schmidt.

The head of the Huthis' political council, Mahdi al-Mashat, has warned against illegally jacking up of fuel prices. Merchants found to be "hiding fuel or raising the prices" will be detained, he said in a statement carried by the rebel-run Saba news agency.

Mohsen Mheimed, a 38-year-old contractor in Sanaa, has not worked in four days because he has been unable to get enough fuel. "I need at least 20 litres a day," he told AFP, adding: "I have to wait for a couple of days to fill up just one car, and in the meantime I can't do my job."

Saudi Arabia and its allies say they continue to enforce an air and maritime embargo to prevent weapons shipments from Iran to the Huthis. The rebels seized the Red Sea coast along with the capital Sanaa and much of the north in 2014.

The coalition intervened in March of the following year, when President Abedrabbo Mansour Hadi fled into exile as the rebels closed in on his last refuge, in the second city Aden. The Yemeni riyal has since then lost more than two-thirds of its value. This week the central bank raised interest rates to a record 27 percent in a bid to stabilise the plunging riyal.

Sufwan al-Khulani, in his twenties, said the country and its people have been "destroyed" by the war, which has claimed nearly 10,000 lives. "It's just too much to endure," he said. "We are constantly looking for ways to get petrol... to get anything really."