Hyundai has entered an agreement to supply 1,000 hydrogen fuel cell lorries to the Swiss commercial vehicle market over a five-year period, starting in 2019.

The Korean manufacturing giant signed a memorandum of understanding with Zurich-based H2 Energy at the IAA Commercial Vehicles Show in Hanover, outlining plans to introduce the vehicles to a variety of fleet operators in Switzerland.

Currently in development, the 18-tonne trucks (34 tonne gross combined weight with a trailer) have a range of roughly 250 miles and can be fully recharged in seven minutes. This refuelling time is broadly comparable with conventional diesel HGVs, but significantly more time efficient than equivalent battery-electric powertrains.

Fuel cell vehicles, or FCEVs, convert hydrogen into electricity, which is then used to power electric motors. The only tailpipe emission from these vehicles is pure water, and the hydrogen itself can be generated using clean energy. Advantages over battery-electric powertrains include greater range and shorter recharging times. 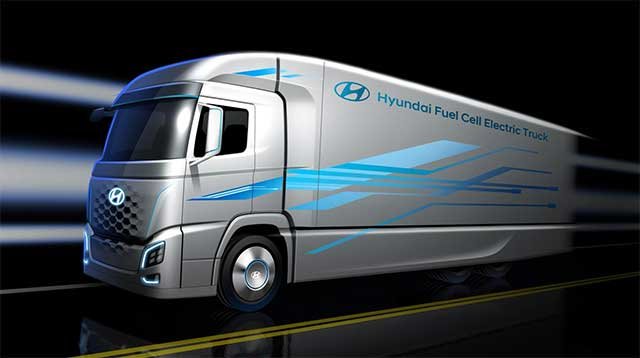 “We are yet again advancing the field of fuel cell technology in the automotive industry with today’s announcement of our ambition to commercialize the fuel cell electric truck for the first time in the world” said Hyundai’s executive vice president In Cheol Lee. “We will continue to seek opportunities for expanding into other markets by carefully monitoring multiple factors such as fueling infrastructure and governmental policies.”

Hydrogen refuelling infrastructure is sparse but growing. The Swiss collaboration will include some development of a supply chain for renewable hydrogen. “A sustainable hydrogen economy needs a designated ecosystem for hydrogen,” said Rolf Huber, Chairman of H2 Energy. “This is why our collaboration between Hyundai Motor, H2 Energy, the Swiss H2 Association, and the Key electricity producer Alpiq in Switzerland is strategic and makes a lot of sense.”