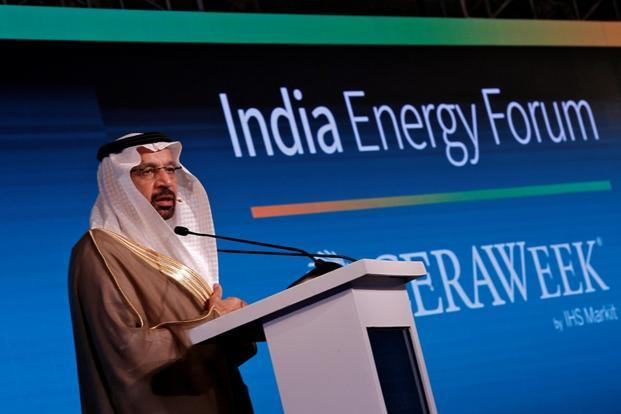 Saudi Arabia is interested in partnering India to develop complementary supply chains, and deploy funds and new technologies here in what may further bring down already low solar power tariffs in the country.

Also, Lightsource BP is betting big on setting up solar power projects here through its partnership with the National Investment and Infrastructure Fund of India (NIIF). “We discussed with Indian leadership the opportunities to synergize our vision with India,” said Khalid A. Al-Falih, Saudi Arabia’s minister for energy (pictured), industry and mineral resources at the India Energy Forum by CERAWeek on Monday.

He said the idea is to develop solar supply chains while also investing in India. Al-Falih, who is also the chairman of world’s biggest oil producer, Saudi Arabian Oil Co. (Saudi Aramco), on Monday met Prime Minister Narendra Modi during a meeting with top executives of global oil companies and experts from the energy sector.

The proposal from Saudi Arabia comes at a time when India has pitched the International Solar Alliance (ISA) as a counterweight to Organisation of the Petroleum Exporting Countries (Opec)—of which the Middle East country is a prominent member.

At the first general assembly of the ISA recently at its headquarters in India, Modi said ISA will play a role similar to that of Opec. “The lowest cost PV (photo voltaic) solar project is in Saudi Arabia. I think some of the developments in financing as well as future technologies that we will be developing in the kingdom will be given priority hopefully to be deployed as part of India’s solar vision,” Al-Falih added.

His announcement also assumes significance given most solar power developers in India have been sourcing solar modules and equipment from countries such as China, where they are cheaper. Saudi Arabia plans to manufacture 200 gigawatts (GW) of photo voltaic capacity by 2030. India on its part has an ambitious 175GW clean energy target by 2022, of which 100GW is to come from solar projects.

Mint reported on 14 June about Saudi Arabia’s public investment fund (PIF), which has invested in SoftBank’s Vision Fund and ride-hailing firm Uber, looking to invest in India’s infrastructure sector. Saudi Arabia is a crucial source of energy for India and hosts a number of expatriate Indians. PIF, the kingdom’s main investment arm, plans to grow assets under management from about $230 billion to over $400 billion by 2020. Building “strategic economic partnerships” is among its key objectives.

India has also emerged as one of the most favourable destination for renewable energy with investments of about $42 billion. The government estimates the sector to have business potential of about $70-80 billion over the next four years.

This in turn has attracted companies such as BP Plc that has already made a $12 billion investment commitment in India. “We are working with a new company called Lightsource BP developing solar projects on a very-very large scale. So far, we have committed to a fund—Green Growth Equity Fund (GGEF) about $250 million of investment in solar projects.

I believe that will get to be a billion dollar fund to develop solar,” said BP’s group chief executive officer (CEO) Bob Dudley at a press conference at the India Energy Forum on Monday evening. BP has a 43% stake in Lightsource, which has invested $3 billion across 2 GW of solar projects globally.

Sultan Ahmed Al Jaber, minister of state in United Arab Emirates government and the CEO of state run-Abu Dhabi National Oil Co. said India’s energy transition does not mean a transition away from fossil fuels. “On the contrary, fossil fuels will remain the dominant source of energy in India, representing at least 80% of the Indian energy mix by 2040.

And oil imports will rise by 175%, accounting for 65% of overall energy imports. In short, oil and gas will remain a fundamental driver of the Indian economy,” he added.