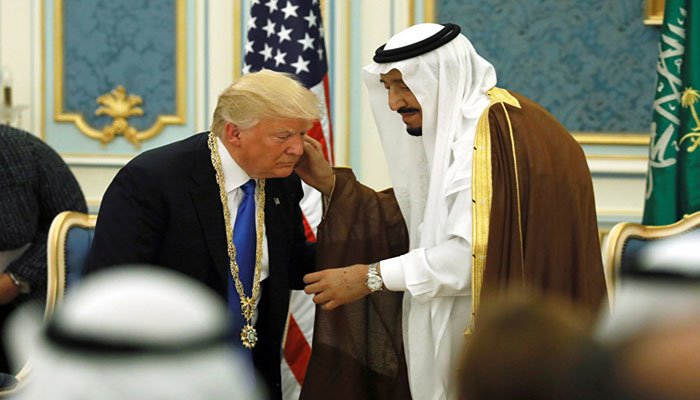 US President Donald Trump thanked Saudi Arabia Wednesday for lower oil prices -- a day after pledging the US would remain a "steadfast partner" of the kingdom despite the murder of a dissident journalist. "Oil prices getting lower. Great! Like a big Tax Cut for America and the World. Enjoy! $54, was just $82," he tweeted. "Thank you to Saudi Arabia, but let´s go lower!"

The remarks came a day after Trump linked his decision to continue backing the petro-state -- despite Crown Prince Mohammed bin Salman´s alleged involvement in Jamal Khashoggi´s death -- to his desire to keep oil prices low. "If we broke with them, I think your oil prices would go through the roof. I´ve kept them down," he told reporters at the White House.

"They´ve helped me keep them down. Right now we have low oil prices, or relatively." Oil recovered slightly on Wednesday after slumping more than six percent, with traders fretting that Saudi Arabia may not deliver on planned production cuts. Trump´s support for Riyadh has been taken by some observers as a move to prevent them from lowering output at the December meeting of OPEC and non-OPEC members.

The gruesome murder of Khashoggi, a US resident and Washington Post columnist who vanished after being lured into the Saudi consulate in Istanbul on October 2, has hugely embarrassed Washington. The killing torpedoed a PR campaign led by the crown prince to show that the conservative Islamic state has embarked on a new reformist path.

"The United States intends to remain a steadfast partner of Saudi Arabia to ensure the interests of our country, Israel and all other partners in the region," Trump said in an earlier statement Tuesday.