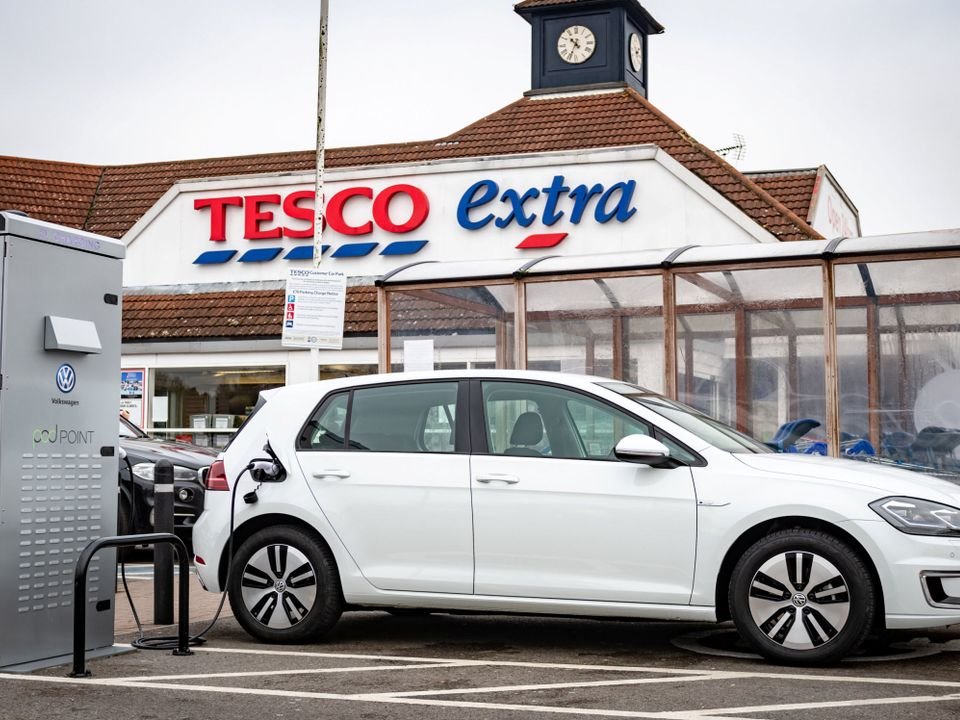 The carmaker, which embarked on a £5bn electric vehicle investment programme in the wake of the so-called dieselgate scandal of 2015, said almost 2,500 charging bays would be installed at up to 600 stores over the next three years.

It said the "vast majority" of electric models in the marketplace would be compatible with the Pod Point network chargers - not just those within the VW Group. Of the charging points being made available, it estimated 2,400 of them would be standard 7kW fast chargers - which would be free to use.

It believed around 100 more would be "rapid" 50 kW chargers, with costs set "at the market rate". Tesco and VW said its plans amounted to a 14% increase in the provision of charging points in the UK. The partnership marks the latest private investment in the UK's charging capabilities since BP announced earlier this year that it was to pay £130m to buy the Chargemaster network and roll-out charging points at its branded petrol forecourts.

It has been a year of profound change for the car industry as manufacturers focus research and development spending on electric technology against a background of hostility towards petrol and diesel. A growing number of national governments, including the UK's, have announced intentions to ban the sale of new petrol and diesel vehicles to help combat pollution.

But UK sales figures show there is still much to be done to persuade drivers to make the switch - despite sales of new alternatively-fuelled vehicles this year easily crossing the 100,000 mark for the first time. The rise of 22% in the year to date has largely been at the expense of diesel - with sales down over 30%. However diesel cars still account for five times more sales than electric or hybrid models.

Petrol-powered new car sales are 9% up and continue to dominate the market. VW told Sky News it would not put a figure on the cost of the UK charging network but said it formed part of the company's effort to "push hardest" in the drive for electric cars. UK board member, Mike Orford, said: "What this has done is to accelerate the push for electric in Europe and worldwide.

"We're putting our money where our mouth is - it's a big revolution...involving the biggest fuel retailer and the biggest vehicle manufacturer. It's a good partnership." When asked how helpful a free 7kW charger would be to the driver of an electric car popping in to a Tesco store for a few minutes he replied: "Every little helps". The partnership was announced as ministers remain under pressure to provide more central investment and support for an electric car future.

Transport minister Jesse Norman said: "The government is committed to making the UK the best place in the world to build and own an electric vehicle. "For that we need high quality infrastructure in place to support ultra-low emission vehicles around the country.

"The government set out plans in its Road to Zero strategy to deliver a significant increase in this infrastructure and we welcome Tesco's pledge to roll out over 2,400 new charge bays across their stores."

RAC spokesperson Rod Dennis responded: "For more than a year we have been calling for charging infrastructure in places where drivers are likely to spend extended periods of time, such as supermarkets and public car parks, so we applaud all the parties involved in agreeing this deal.