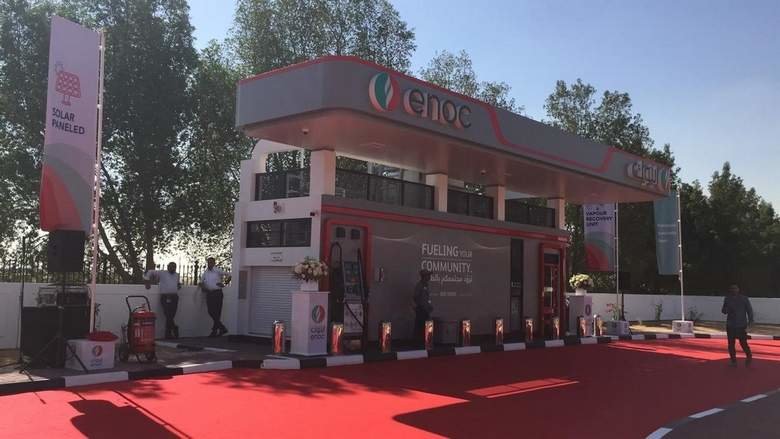 Dubai has just launched its very first compact petrol station that will cater to residential and remote communities throughout the city. Three stations will also come up at the Expo 2020 Dubai site.

Currently in its pilot stage and set up within the Arabian Ranches community, the first relocatable unit from Enoc has been up and running for five days and has so far pumped 12,000 litres of fuel into motorists' cars. With two pumps on site and a fuel tank set above ground, the relocatable unit can be dismantled and moved to a different location within 30 days, if needed.

As the first such compact petrol station in the Middle East, it has a tank capacity to hold 30,000 litres of Special 95 and can fill up to 400 cars per day. The decision to launch such a community-convenient option to fueling came about as a way to help create ease of use to people living in areas where petrol stations aren't within easy reach.

"We have been developing this idea for two years. We wanted to create a small format because of the scales of land. As infrastructure across the city continues, it's a way to reach areas away from the city, easily. The concept allows the station to be rebuilt. We call it a plug and play concept. It's unique because it's easy to move," Zaid Alqufaidi, managing director of Enoc Retail told Khaleej Times.

"With Enoc an official sponsor of Expo 2020 Dubai, we have already agreed on three locations for the compact petrol station on site. We are currently in the design stage of these stations and we are working on something unique, but yes, there will be three stations in all for the Expo 2020 Dubai setting," he said.

As a relocatable mobile unit, the petrol station may look small scale, but it works in the same way as permanent stations across the city, in that it offers all forms of smart payment methods including RFID and mobile payments.

In terms of future plans, Alqufaidi said Enoc has identified "four primary locations throughout the city" to place more compact petrol stations, and said it is "specifically targeting residential communities, like Arabian Ranches". Addressing issues regarding sustainability and safety, he said measures have been taken to ensure no disruption to residents.

It is fully sustainable and has been equipped with solar pv panels and a Vapour Recovery System, a process that enables the recovery of 70 per cent gasoline vapour emissions. In addition, it has been fitted with an overfill prevention valve, audible alarm, pressure vacuum vents, and emergency vents for the inner and outer wall.