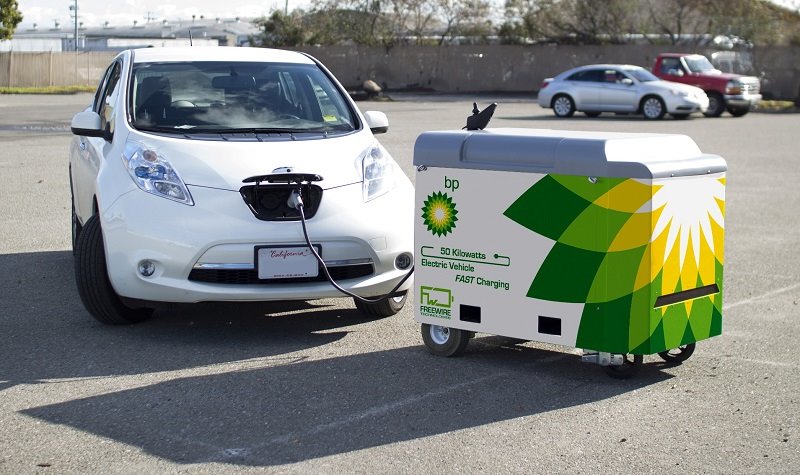 BP began testing FreeWire’s Mobi Charger units at some of its BP retail sites in the United Kingdom and Europe. The Level 2 charging station, which sits on wheels, includes storage so it can be charged up during periods of nonpeak rate periods. Once fully charged, it can then charge from five to 10 EVs per day, adding about 30 miles in range per hour.

“Using FreeWire’s mobile system, we can respond very quickly and provide charging facilities at forecourts where we see the greatest demand without needing to make significant investments in today’s fixed technologies and infrastructure,” said Tufan Erginbilgic, CEO of BP Downstream, at the time. “The opportunity also to explore options for providing charging services away from our existing retail sites makes FreeWire an ideal partner for BP.”

More recently, BP Ventures was the lead investor in a series A round of funding that raised $15 million for FreeWire, Venture Beat reported. Other investors included Volvo Cars Tech Fund; in 2017, Volvo announced it would manufacture only EVs and hybrids beginning in 2019. FreeWire plans to use some of the money to build out an ultrafast charging station that can deliver 480 miles of charge in an hour.

“It is important that our initial group of investors hail from such a diverse set of industries—they collectively reflect a wide range of the energy challenges we are now in a better position to tackle,” Arcady Sosinov, CEO of FreeWire, told Venture Beat. “Their backing at this pivotal stage is rooted in a shared vision of a future with widespread transition to flexible, sustainable electrification.”

The technological race to enable EV charging in about the same time it takes to fuel up a gasoline-powered vehicle—seen as critical for EVs to compete with the internal combustion engine—hit an important milestone recently. In Germany, BMW AG and Porsche have revealed an ultrafast prototype charging station that can deliver 62 miles’ worth of range to an EV battery in less than three minutes, Bloomberg reported.

The prototype, which was developed by a consortium of BMW, Porsche, Siemens AG and German charging developers Allego GmbH and Phoenix Contact E-Mobility GmbH, has a 450-kilowatt capacity. This is more than triple that of Tesla’s Supercharger charging stations. It takes about 30 minutes for a Tesla Supercharger station and most DC Fast Chargers to deliver 80% capacity to an EV battery.

BMW, Daimler AG and Volkswagen—Porsche’s parent company—are working together on a fast-charger network along highways in Europe. One issue with the ultrafast charging prototype, however, is that current EVs cannot handle charging up with that much power that quickly, said Bloomberg.