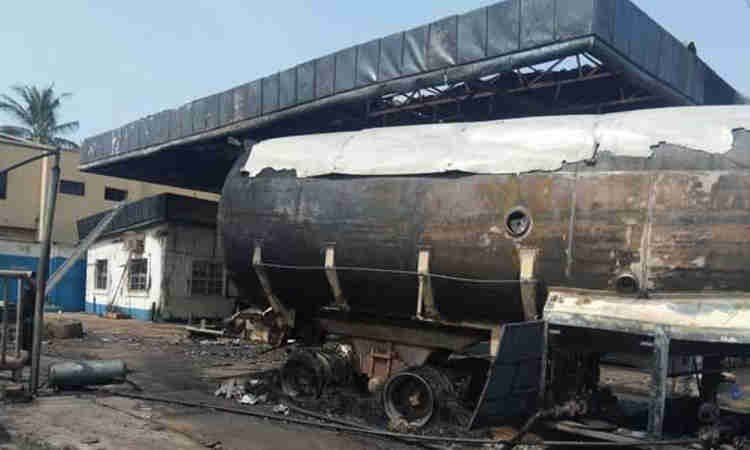 A tanker explosion rocked a petrol station , Enugu, Nigeria, destroying properties worth billions of naira. It was gathered that the blast was triggered by a cooking gas tanker loading products.

The petrol station called Juhel petrol station was gutted by the resultant fire which also spread to nearby shops, vehicles and houses. Men of the fire service successfully put out the fire without reports of casualties.

Following the fire outbreak, the Enugu State Governor, Ifeanyi Ugwuanyi visited the scene of the tanker explosion where residents of the area commended the Enugu government for the swift intervention and expertise displayed by officers and men of Enugu State Fire Service in putting out the fire, without any loss of life.

The inferno according to eye witnesses was caused by a truck discharging liquefied gas at the filling station, which lost control and hit the dispensing nozzle and ignited the fire.

The State Fire Service upon receiving a distress call rushed to the scene and put out the fire which affected the petrol station, a commercial bus, a transformer, three shops and a residential building, shortly before Governor Ugwuanyi, his deputy, Mrs. Cecilia Ezeilo, the Speaker of the State Assembly, Edward Ubosi and the State Commissioner of Police, Mr. Danmallam Mohammed arrived the scene.