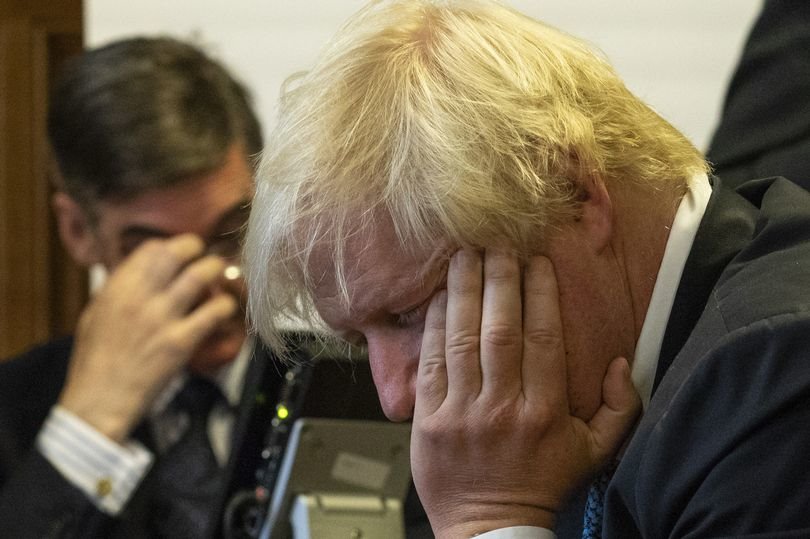 Boris Johnson has trashed his own Brexit plans – dumping a load of paperwork in a petrol station bin. The calamitous Conservative stuffed 70 pages of parliamentary work in the rubbish container after pulling up with a passenger, thought to be new love Carrie Symonds.

But he was in such a rush that some pages fell to the ground as he ran across the forecourt to pay for his petrol. The documents – including handwritten memos on the economy, the Irish backstop and his Brexit views – were picked up by a baffled member of the public and shown to the Sunday Mirror.

The finder said: “He says he wants to be Prime Minister. But how could he look after the country when he can’t even keep hold of his own notes on the biggest crisis in decades? It’s really unbelievable he put these documents in a public bin without shredding them. “But he is just like you imagine him in real life, blustering about with no awareness.”

In the handwritten notes and official documents, 54-year-old BoJo suggested there is “no strategy” for leaving the EU without a deal. They also contained a wild claim that chief whip Julian Smith is plotting a second referendum after after failing to get Theresa May’s proposed deal through Parliament.

Referring to a People’s Vote, one note said: “The party has a very clear way forward on Brexit. It is the true way. The chief whip is alleged to have a plot to put it back to the people.” A spokesman for Mr Smith rejected that last night, saying: “This allegation is absurd and patently untrue.”

Another Boris note said: “We could go for a People’s Vote, as if the 33million people who voted last time were not people.” Some letters were also included in the bundle, dumped while Mr Johnson was in the South West on January 21. There was also a bizarre doodle of a giant tooth and he even jotted down his views on saving the planet – thought to be a nod to environmentalist girlfriend Carrie.

In a tirade in which he compared the British people to “lions led by donkeys”, he appeared to admit there is no plan if Britain were to exit the EU without a deal on March 29. He wrote: “No deal does not mean crashing out, it can mean we are getting it right. We don’t know what the strategy is. We have nothing to fear but fear itself. Fear isn’t scary.”

Other scribbles appeared to be speech ideas. One extract read: “We are about to make an historic mistake. I will repeat – this is a ridiculous pseudo Brexit. “We have nothing to fear from no deal. They won’t dare derail Brexit. There is simply no consensus. If you want to take this deal, you’re a terrible sellout.” One particularly bizarre note said: “I noticed how the EU works ...to create a sense of identity... prawn cocktail crisps.”

This is believed to be a reference to a myth that the EU once tried to ban the flavour from our shelves, an issue Boris used during the referendum vote. The dumped papers are the latest in a long line of Boris blunders. While Foreign Secretary he wrongly claimed detained Briton Nazanin Zaghari-Ratcliffe was training journalists in Iran.

The mum, who is accused of spying, was then warned her sentence could be increased. He described Africa as a country and tried to quiz Sikh leaders about whisky exports to India – when alcohol is banned in their faith. Defiant Mr Johnson said last night: “Just as the British public are com-plaining that newspapers are full of rubbish, the Sunday Mirror has gone out and proved it by publishing the contents of a petrol station bin.”

Mrs May, meanwhile, told MPs to stop pushing for a second referendum. Writing in a Sunday newspaper she said: “There is no majority in this Parliament to hold another vote. “Indeed, I believe there never will be. The UK is leaving the EU.”