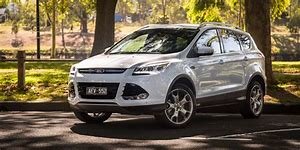 Diesel is declining in France, while ethanol-E85 is booming in France. The reason? Customers have lost faith in the former, while the latter is rediculously cheap. At €0.68 per litre on average, it is about half the price. To take advantage of the growing interest in E85, Ford France has decided to launch a Flexifuel version of its Kuga
For a supplement of just €100, this compact SUV can now be ordered as a vehicle that can burn either standard petrol (SP95) or bioethanol (E85). The latter can be produced sustainably and is therefore promoted by French authorities
"We chose the Kuga because the model already exists as a Flexifuel model in the United States and because we were able to team up with the Swedish Ford subsidiary, which will also distribute it on its market ", explains Louis-Carl Vignon, President of Ford France.
Tax and fuel cost advantage
The Flexifuel model is based on the 1.5 Ecoboost 150 hp model. Instead of 156 g of CO2 per km, the adapted model sees its official CO2 rating cut by 40% to just 94 g/km, which annihilates the fiscal penalty (the so-called malus). Mated to the automatic gearbox, the Flexifuel boasts a CO 2 rating of 122 g/km (i.e. a 60-euro penalty) instead of 202 g/km.
The Ford Kuga Flexifuel is built in Valencia and gets modified directly in the factory. The technical modifications include a different fuel system and new valve seats. Because bio-ethanol contains less energy than petrol, the engine needs more of it to deliver the same performance. Even taking into account a fuel consumption increase of 20%, driving on E85 would still be 40% cheaper than driving on petrol.
Alternative to CNG
Other OEMs, like VW Group and FCA, have invested in compressed natural gas (CNG) as an alternative fuel to feed existing petrol powertrains. Natural gas can also be produced sustainably, but most of it is fossil of origin. What E85 and CNG have in common is an infrastructure issue. There are not that many petrol stations around that distribute the alternative fuel.