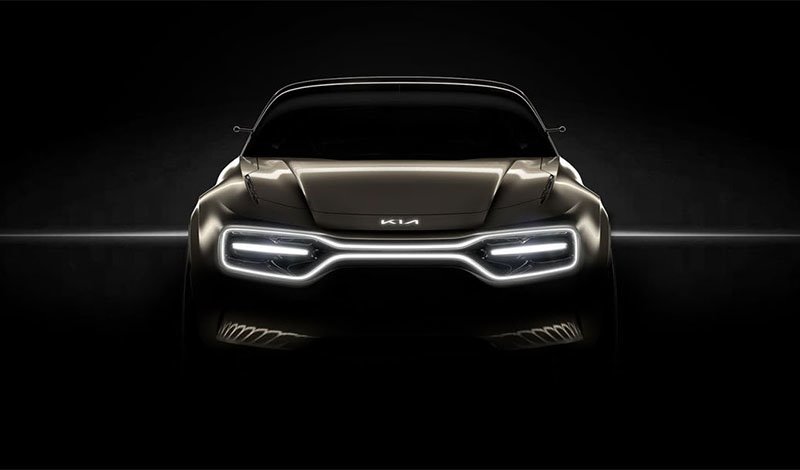 South Korean automaker Kia has made no secret of its interest in a slice of the slowly growing EV pie, and it will use the Geneva motor show to unveil a new EV concept that could preview one of its next production electric cars.

Glimpsed for now in a shadowy but still revealing image above, the EV concept features a number of design elements new to Kia, including a wider, illuminated interpretation of the Tiger Nose grille, and even a new font for the illuminated Kia logo.

The shape of its greenhouse and wheel arches suggests that the EV concept will be either a coupe or a sedan with a coupelike profile -- the greenhouse is pretty narrow in relation to the car's footprint in the image Kia shared. The rakish windshield also suggests a relatively small interior, likely pointing to a coupe body style or perhaps something with rear half-doors.

But the most interesting design element, by far, is the profile of the illuminated grille which reminds us of the chrome grille outline of the 1972 Plymouth Road Runner. The biggest question that this upcoming concept asks is whether Kia wants its next EV to be a performance car along the lines of the Stinger, following up on the Kia e-Niro.

The Stinger certainly opened the door for performance models for Kia. An evolution of the e-Niro's EV underpinnings may be a logical next step, especially given the fact that other EV automakers have largely ignored the coupe body style while focusing on midsize crossovers, Tesla included.

This points to an unfilled segment that is currently being ignored by automakers with EV lineups, that of a midsize electric coupe priced below $50,000 -- an electric Toyota Supra if you will. EV automakers are chasing tried-and-tested segments at the moment, aiming for as much volume as possible with body styles that can convert buyers to EVs, but a smallish, sporty Supra-size coupe has not been among the vehicles in their pipelines.

We'll have to wait until March 5 to see this concept in the metal in Geneva, but Kia and its Hyundai sister brand have shown that they're not afraid to jump into the deep end of the EV pool with their recent production debuts, and they're equally unafraid of fielding performance models despite their budget-minded recent past.