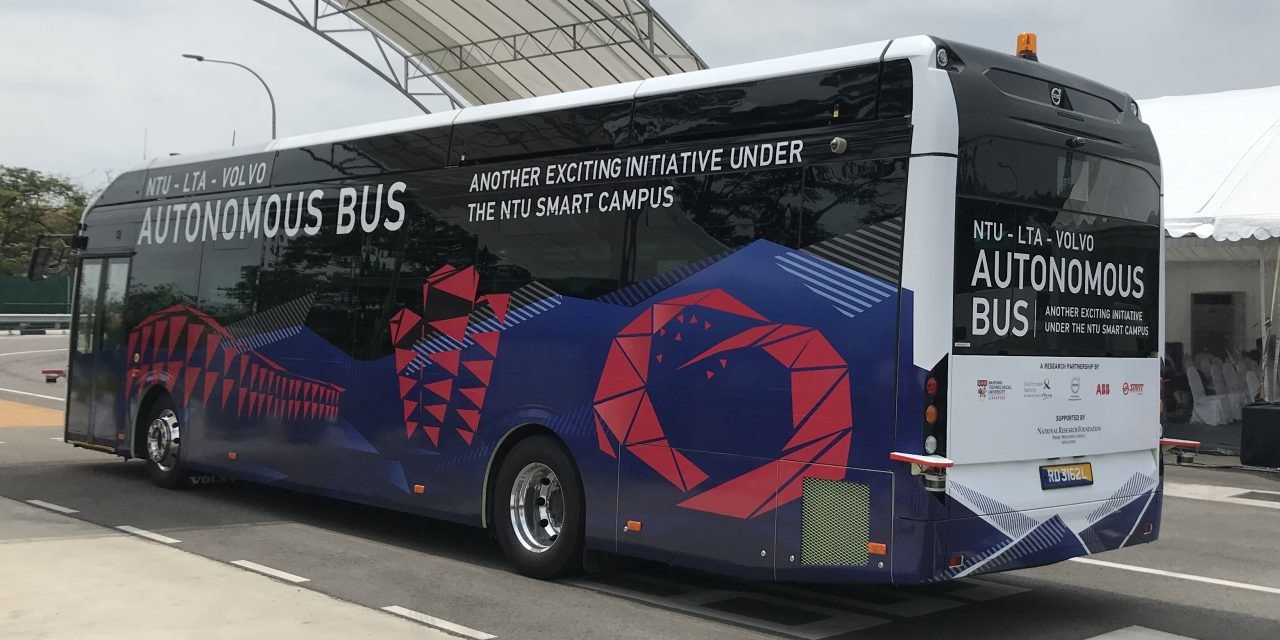 The bus is the first of two that have undergone preliminary rounds of testing at the Centre of Excellence for Testing and Research of Autonomous vehicles at NTU. The bus requires 80% less energy than an equivalent-sized diesel bus and issues zero emissions, the company says. It will be tested on the NTU Smart Campus.

The NTU and Volvo partnership is part of the collaboration between the University and LTA under NTU’s living lab platform. The platform assesses technology maturity and road-worthiness, including the certification of technologies for deployment on public roads.

The bus comes with a Volvo Autonomous Research Platform software that is connected to key controls such as its navigation system, as well as multiple sensors.

This includes light detection and ranging sensors (LIDARS), stereo-vision cameras that capture images in 3D, and an advanced global navigation satellite system that uses real-time kinematics. This is like any global positioning system (GPS), but uses multiple data sources to give pin-point location accuracy of up to one centimetre.

The system is also hooked up to an “inertial management unit”, which acts like a two-in-one gyroscope and accelerometer, measuring the lateral and angular rate of the bus. This will improve its navigation when going over uneven terrain and around sharp bends, ensuring a smoother ride.

These sensors and GPS platforms will be managed by a comprehensive AI system that was developed by NTU researchers. It not only operates the various sensors and GPS systems on the bus, but also enables it to navigate autonomously through dense traffic and tropical weather conditions.

ABB will develop a smart fast-charging solution based on its OppCharge concept. Offering a charge power of 300kW via a pantograph mounted on the infrastructure, the fast chargers will recharge a battery in just three to six minutes. This will enable charging during the layover times at the end of the bus route, without impacting normal operations.

“ABB is committed to pioneering technological innovations for a sustainable future. We are extremely excited to collaborate on such a landmark project which marks a positive step toward the electrification of public transport across the region and beyond,” said ABB president of electrification products Tarak Mehta.