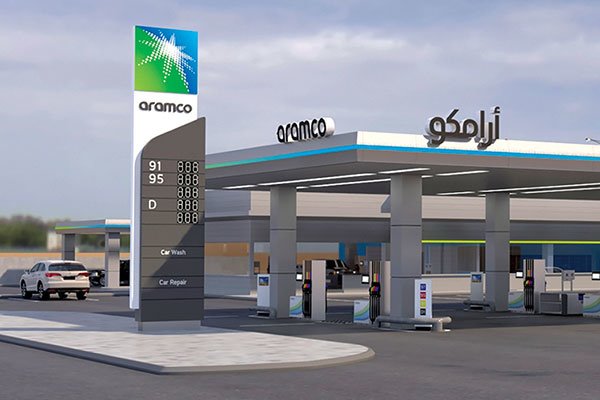 The earnings of Saudi Arabia’s giant oil company have long been a mystery, kept under wraps by the country’s government. But Saudi Aramco opened its books, revealing that it generated $111.1 billion in net income last year, making it probably the world’s most profitable company by far.

It handily beat Apple ($59.5 billion in net income in 2018) and ran laps around other oil companies like Shell ($23.9 billion) and Exxon Mobil ($20.8 billion). The disclosure reveals a company that is hugely profitable but also tightly bound to one country and the price of oil.

Aramco issued the financial data as it prepares to borrow up to $15 billion through a bond sale, in what could signal a more aggressive approach to capital-raising for both the company and Saudi Arabia, which is seeking to cut its dependence on oil and gas revenue.

The money will help finance Aramco’s $69 billion purchase of most of a state-owned petrochemical company from Saudi Arabia’s sovereign wealth fund, whose chairman is Crown Prince Mohammed bin Salman. The crown prince wants to diversify Saudi Arabia’s economy, and the sovereign wealth fund has been investing in technology companies like Uber and Tesla as a way of doing so. A planned stock sale by Aramco was expected to raise money for that purpose, but it was postponed last year.

The sale of a stake in Saudi Basic Industries, the petrochemical company, appears to be an alternative way to raise the funds. While the crown prince pursues new investments and tries to recover from the political fallout caused by the killing of the Saudi journalist Jamal Khashoggi last year, Aramco also appears to be trying to make itself into a broader energy producer and, thus, more attractive if the government decides once again to try to sell a slice of the company.

Aramco’s chief executive, Amin Nasser, has said that the company is pursuing international acquisitions in areas like liquefied natural gas, a chilled fuel that can be transported globally on ships like oil. The financial results also show how the company’s fortunes rise and fall with the price of oil. In 2016, for instance, a time of low prices, the company reported only $13.3 billion in net income.

For investors, Aramco’s ties to the Saudi government are also a persistent concern. “Unlike Exxon and Chevron, its revenue streams are highly dependent on a single country that could face real instability risks,” Ayham Kamel, an analyst at Eurasia Group, a consulting firm, wrote in a recent note to clients. But analysts said that the financial information revealed on Monday showed that Aramco had plenty of firepower for more deals.

Aramco has “a huge amount of room” to issue debt, said David G. Staples, a managing director at Moody’s Investors Service, which issued a credit rating for Aramco on Monday Mr. Staples and a colleague, Rehan Akbar, noted that the company had already achieved enormous size and profitability without borrowing or selling stock to investors. In 2018, Aramco paid about $160 billion to the government in dividends, taxes and royalties.

Moody’s attributed Aramco’s profitability in part to economies of scale stemming from enormous production volumes extracted from oil and gas assets of unmatched size. Aramco has some of the world’s largest oil fields, leading to very low costs. “Aramco’s scale of production in combination with its vast hydrocarbon resources is a very strong competitive advantage,”

Moody’s analysts wrote. The prospectus reveals some long-hidden details about the size of Saudi Arabia’s oil fields. Chief among these is a monster called Ghawar, which extends for about 120 miles in the eastern part of the country. The world’s largest oil field, according to the prospectus, Ghawar has accounted for more than half of Saudi Arabia’s cumulative production yet it still has reserves of 48 billion barrels and is capable of producing nearly four million barrels a day, both more than all but a handful of countries.

Moody’s wrote that Aramco was “conservatively managed” with “very low debt levels.” Mr. Staples said that based on his conversations with Aramco officials, he expected this careful approach to debt to continue, a policy that is likely to find favour with investors if the Saudi government decides to revive its I.P.O. plans.

The agency rated the company A1, a strong rating but below that of large Western oil companies including Exxon Mobil and Shell. Mr. Staples said the lower rating reflected the concentration of most of Aramco’s operations in Saudi Arabia, which shares the same credit rating, and the government’s dependence on oil and gas revenue.

The thinking is that if Saudi Arabia were to encounter political instability or hard times, the oil company would feel the impact. “We have to take into account the risk profile” of the country, he said. The company, founded by United States oil companies (Aramco is short for Arabian American Oil Company), was nationalised by the Saudi government in the 1970s.

In its prospectus, Aramco listed some of the risks and drawbacks that it faced in its operations. The Saudi government, for instance, determines how much oil Saudi Aramco should produce “based on its sovereign energy security goals or for any other reason.” The company also may face litigation over climate change or antitrust issues stemming from its membership in the Organisation of the Petroleum Exporting Countries, especially in the United States, Aramco’s prospectus said.