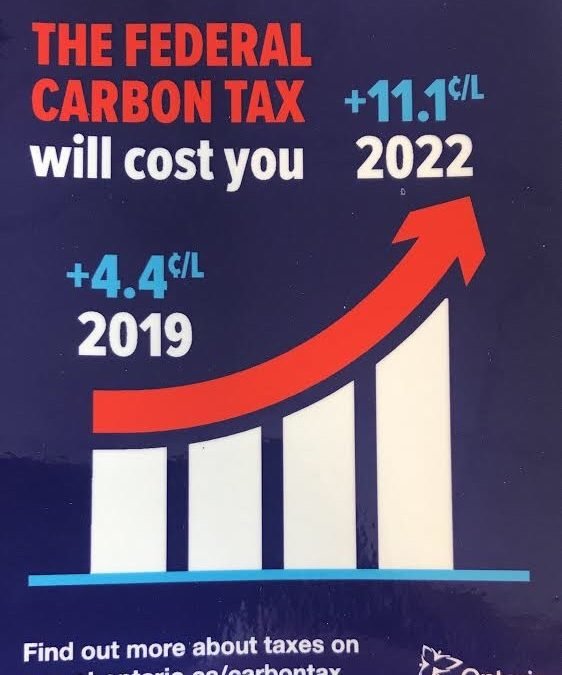 The government orders fuel stations at retail outlets to display on gasoline pumps a prescribed notice from the Minister regarding the price of gasoline sold in Ontario.

The notice is in reality a propaganda sticker which shows the federal carbon tax adding 4.4 cents per litre to the price of gas at present, rising to 11 cents a litre in 2022. The stickers will not reveal that Ontario residents will be obtaining tax rebates on income tax returns at $128 annually and $307 for a family of four.

Failure to observe this mandated form of expression could result in fines of up to $10,000 per day for gas station operators who neglect to display these stickers. The Ford government will be sending inspectors to enforce this Orwellian law that amounts to mandated government carbon tax propaganda.

There is grave doubt that this law is even constitutional and could be a violation of the section 2(b) freedom of expression guaranteed in the Canadian Charter of Rights and Freedoms. The Supreme Court of Canada from the earliest days of the Charter was quick to affirm that freedom of expression includes a freedom not to express government mandated expression unless the government can prove such forced expression are reasonable limits demonstrably justified in a free and democratic society under section one of the Charter.

In an early Charter decision the Supreme Court stated that the Charter “guarantees freedom of thought, belief, opinion and expression. These freedoms guarantee to every person the right to express the opinions he may have: a fortiori they must prohibit compelling anyone to utter opinions that are not his own.”

While the Ford government may point to decisions of the Supreme Court validating some of the enforced warnings on cigarette packages, the Court put the government through an intensive inquiry on how they could justify the enforced warnings that was designed to warn consumers of the deadly consequences of tobacco consumption that has caused huge drains on the health budgets of governments across Canada.

It would be almost humorous to see how the Ford government could argue that the enforced use of political propaganda stickers on gas pumps are similar to the widely accepted use of warnings on cigarette packages.

The government would be forced to answer what exactly was the purpose of this enforced expression? If the purpose was a legitimate one, could it be achieved without such a deep attack on the freedom of expression.