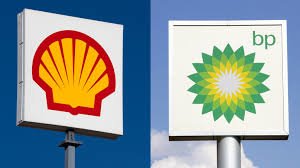 Oil and gas giants BP and Shell are donating $1 million each over two years to a Republican-backed group urging Congress to pass a federal carbon tax to fight climate change.

The two companies are providing money to Americans for Carbon Dividends, the advocacy arm of the Climate Leadership Council, a group led by former Republican Secretaries of State James Baker III and George Shultz that is promoting a carbon tax plan that would return the revenue to taxpayers.

BP and Shell’s action reflect oil and gas companies' intentions to move beyond just rhetorical support for carbon pricing proposals, but a willingness to also dedicate money to lobby for them.

“The additional members who contributed show we are continuing to increase our momentum in support of the plan,”

Shell and BP are joining a coalition of nearly 100 companies for two days of lobbying on Capitol Hill this week geared toward generating support for a carbon tax. “It’s our hope Shell’s support of AFCD and like-minded coalitions ultimately leads to legislation that establishes a national price on carbon,” Shell U.S. President Gretchen Watkins told the Washington Examiner.

Businesses and economists contend a carbon tax is the simplest and most efficient way to address greenhouse gas emissions by applying a per-ton fee for large emitters like power plants and refineries. Supporters view the approach as a market-based solution, one that would encourage energy producers to switch to cleaner non-fossil fuel alternatives if doing so costs less than paying the tax.

Large trade groups such as the American Petroleum Institute, the U.S. Chamber of Commerce, and National Association Manufactures have refused to endorse carbon pricing, even as member companies say they support it.

“I’d like to think this represents progress, but I remain skeptical given that Big Oil gives far more to trade associations and front groups that remain implacably opposed to a price on carbon,” Sen. Sheldon Whitehouse, D-R.I., a leading critic of the oil and gas industry who supports a carbon tax, told the Washington Examiner.

In recent years, activist shareholders have pushed for resolutions calling on major oil and companies to disclose the risk posed to their business by climate change, take actions to reduce that risk, and to re-evaluate their associations with trade groups.