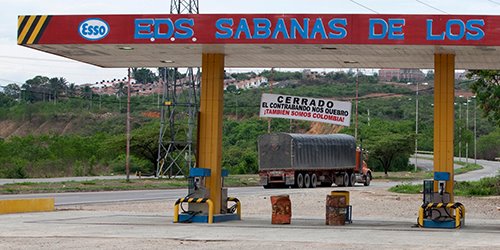 A gas station with a banner reading, "Closed, smuggling broke us," on the Colombia side of the border between the cities of San Antonio, Venezuela, and Cucuta, Colombia, November 12, 2009.

Rural fuel stations in Colombia are allegedly selling vast quantities of fuel to criminal groups to be used in coca paste processing, with as much as 28 percent of the country’s gasoline potentially going to organised crime.

The Attorney General’s Office announced it is investigating 33 fuel stations in areas known for the production of coca paste after the sales reported by these stations were shown to be suspiciously high for local demand. Since the announcement, the government has mulled issuing a resolution that would increase regulations on these establishments and help to prevent irregular sales of gasoline.

One fuel station in Riosucio, in the department of Chocó, reported sales of 1.2 million gallons of fuel in a town whose population is only 20,000. The gas stations under investigation are all located far away from major urban centres and many are in areas with no paved roads — the same settings where armed actors and coca crops are present.

The Attorney General’s Office is also investigating money laundering and embezzlement of state funds involving these gas stations. Gas stations located in remote, rural areas are eligible to receive tax relief and exemption from tariffs. Twelve of the 33 stations under investigation are eligible to receive the subsidies, which amount to about 1,476 million pesos (approximately US$450 million) per year.

Allegations that criminal groups are buying up fuel are not new. Last February, authorities declared some 1,000 fuel stations to be involved in such sales. Of the 250 million gallons of gasoline sold in Colombia in 2018, as much as 70 million, or 28 percent, went to the production of cocaine, authorities said.

The illegal sale of fuel for the processing of coca leaves in Colombia has been a persistent issue. Authorities have tried to crack down on the practice, but their efforts are increasingly made more difficult as cocaine production in Colombia continues to reach record highs.

Of the 5,439 fuel stations in the country, 1,249 are located in the municipalities with high coca cultivation. The southwestern department of Nariño has seen 302 fuel stations opened in the last two years, according to the Ministry of Mines and Energy, with five of the new targets being located there.

Additionally, in border departments such as Norte de Santander and Nariño, state subsidies of gasoline may well be financing coca production. The rise of fuel smuggling from Venezuela has also put a dent in the fuel sales at local stations, such as those in Norte de Santander, a smuggling hub. Much of the contraband fuel from Venezuela is also destined for coca paste processing.

But Colombia’s new strategy to combat this practice shows promise. The use of more complete data sets tracking atypical sales at gas stations was what flagged these transgressors. Likewise, the government responded quickly with new regulations, showing that they are taking the problem seriously. Nonetheless, only a small percentage of gas stations profiting from the illegal sale of fuel have been identified so far.