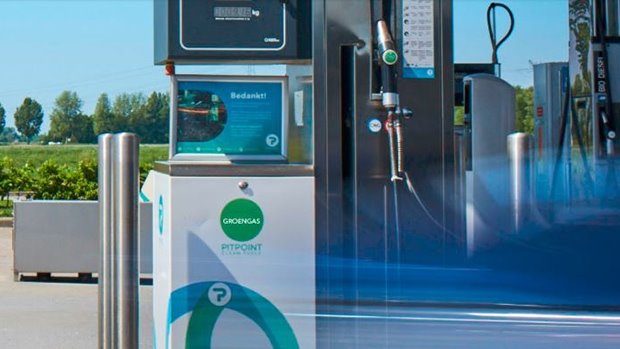 Starting this summer, PitPoint BV only supplies renewable green gas to its public CNG filling stations in the Netherlands.

This is an important milestone because it increases the CO2 profit by refueling at PitPoint. Driving on green gas reduces CO2 emissions by up to 80 percent compared to diesel. (Source: Nature & Environment fuel rankings).

The move to 100 percent green gas could not be made earlier because PitPoint only wanted to make the switch if it was certain of long-term continuity of supply. As a result, until now, PitPoint offered both CNG and green gas in its network. In the meantime, the clean fuel supplier has succeeded in supplying fully green gas to its customers from 1 July 2019 through the public network.

Marja Versleijen, director at PitPoint: “This is a huge step for us. It has always been our goal to provide fully renewable fuel at all our public locations. That this has already been achieved is a milestone that we are extremely proud of.”

The green gas supplied by PitPoint comes from domestic sources and originates from residual flows such as manure, organic waste and sewage sludge. This green gas has been produced at Meerlanden, Biogas Leeuwarden and Ecofuels, among others. PitPoint also invests in the production of green gas. To this end, PitPoint actively cooperates with developers of projects such as the biofuel plant in Hardenberg.

Versleijen: “We see an increasing need for advanced biofuels and therefore we want to invest in the entire chain so that we can offer our customers regional or locally produced green gas.”