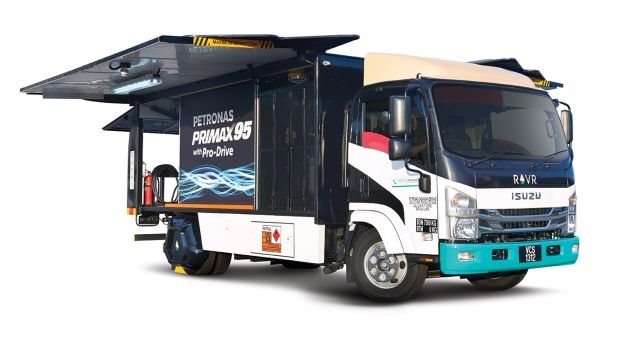 Petronas Dagangan has announced the introduction of ROVR, Malaysia’s first mobile refuelling service. The service started as a pilot project last October by serving commercial customers (B2B), providing scheduled deliveries of Petronas Dynamic Diesel to fleet vehicles in which the refuelling process take place at the customers’ premises, at their convenience.

End-consumers (B2C) will soon be able to experience Primax95 with Pro-Drive through the workings of ROVR – the refuelling service is slated to make its appearance at high-traffic hotspots, widening PDB’s coverage area beyond the scope of traditional stations.

The process works much like a regular refuelling process – all you need to do is drive up to a ROVR truck, park your vehicle, choose how you want to pay, and wait as the ROVR Ranger (the term given to the refuelling operator) fills up the tank. You also get Mesra points with your fuel purchase.

The company said that its ROVR fuel trucks have been certified to offer safe fuel delivery and dispensing according to the stringent health, safety, security, and environmental (HSSE) requirements stipulated by national authorities and regulatory bodies. It added that all its ROVR trucks are equipped with sensors to monitor vital information and maintain operational safety throughout the duration of service, at all times.

According to PDB, it will expand ROVR services nationwide by the end of the year and set up more refuelling sites.