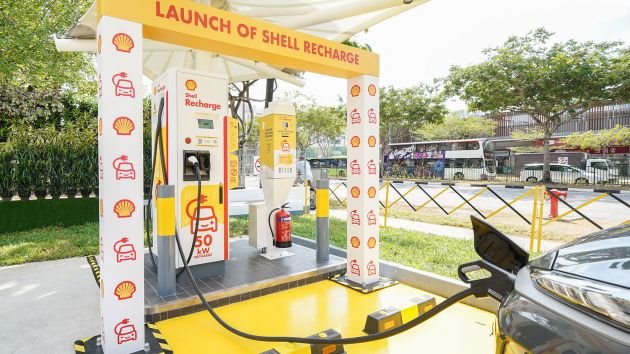 Shell will be launching electric vehicle chargers at selected petrol stations in Singapore, claimed to be the first of its kind in Southeast Asia.

Dubbed ‘Shell Recharge’, the EV charging facilities will be ready at 10 Shell stations, or approximately 20% of its station network in the city-state by October, the company said.

The facilities employ 50kW DC chargers, offered at a rate of SGD$0.55/kWh. One charging facility is operational at the Sengkang station this month, with the remaining nine at Newton Hooper, Alexandra, Yishun, Ang Mo Kio, Paya Lebar PIE, Choa Chu Kang, Boon Lay, Havelock and Bukit Batok West to be ready in October, it said in a statement.

“Shell Recharge is one such example of how we make it more convenient for our customers to embrace cleaner mobility. Shell aims to make more of such low-carbon energy solutions available in Singapore in the months and years to come,” said Shell Singapore country chairman Aw Kah Peng.

The Shell Recharge network operates on network management software by Greenlots, a member of the Shell Group. In Malaysia, Shell’s presence on the EV charging front is via a partnership with BMW, where the charging bays located within Sunway Pyramid are outfitted with BMW i Wallbox Plus chargers; Shell does not have EV chargers at its petrol stations in Malaysia at this point.

As of 2017, Petronas has 55 charging stations nationwide, to grow to 100 ChargEV charging points in total. The existing ChargEV points at Petronas stations are New Motion 32A, 400-volt 22kW units.