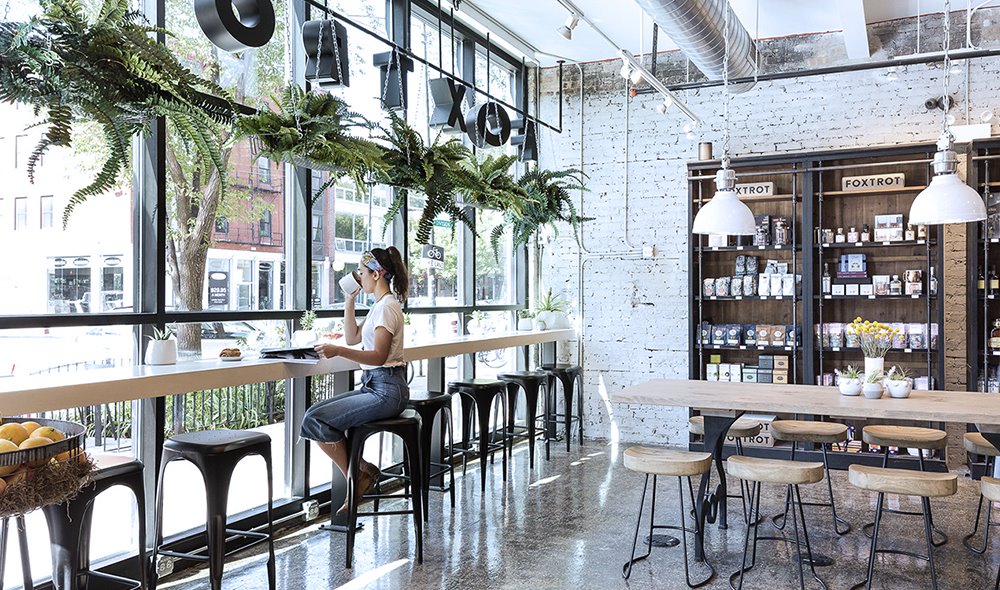 A new crop of upstart convenience retailers, like Alltown Fresh on the east coast, Foxtrot in Illinois, Green Zebra Grocery in Oregon, The Goods Mart in California, Choice Market in Colorado, Barrels and Vines in Michigan and Bridges General on both coasts, are disrupting the industry status quo by offering restaurant-quality fresh, prepared foods, salads, organic and better-for-you packaged goods and even craft beer in upscale buildings replete with wood inlaid flooring, soft lighting and attractive refrigerated display cases and shelving.

These aren’t your grandfather’s convenience stores. In the process, these upscale-format disruptors are redefining the definition of the American convenience store — and they’re getting the attention of the industry’s big conventional players like 7-Eleven, Wawa, Sheetz and others, along with retail heavyweight Amazon and its Whole Foods Market supermarket chain.

The disruption unfurling across convenience retailing comes against the backdrop of Amazon Go, the cashier-free, convenience/grocery-store format featuring premium prepared foods that bowed in 2018. Given Amazon’s influence on retail trends and grip on shopper habits — its Amazon Prime loyalty program, for one, boasts more than 100 million members worldwide — when the online giant moves to shake up convenience stores, attention must be paid.

Ryan Riggs, senior vice president of retail operations for Global Partners LP, the parent company of Massachusetts-based Alltown Fresh, and a c-store industry veteran, said the convenience store industry is at a tipping point and ready for change. 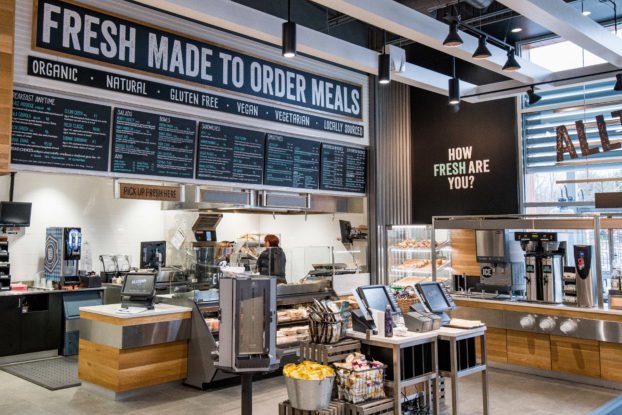 “Convenience retailing is the retail format least saturated with big national players, which offers an opportunity for innovators like Alltown Fresh and others,” Riggs told CO—. “Our goal with Alltown Fresh is to present a very distinct paradigm shift where people may fill up with fuel but they’re coming for our incredible in-store food and beverage offerings and experience.”

Traditional c-store retailers lead with fuel, while the in-store offering is secondary, Riggs said. “We’re flipping that and instead we are leading with fresh prepared food and better-for-you offerings throughout the store.”

Fellow disruptors Foxtrot, Green Zebra, The Goods Mart, Choice Market, Barrels & Vines and Bridges General are also leading with stores featuring an upscale decor package and fresh and better-for-you foods. Like with Alltown Fresh, it’s hard to distinguish if Denver-based Choice Market is a restaurant, grocery market or convenience store because of its extensive offering of high quality, fresh, prepared foods, organic and gourmet groceries, and fresh produce, along with some more traditional c-store fare.

But according to founder Mike Fogarty, it’s without question a convenience store, just a “better” or “hybrid” version. Green Zebra Grocery founder Lisa Sedlar, who worked as a buyer for Whole Foods and later was president of New Seasons Market, a natural foods grocery chain based in the Pacific Northwest, tells all who ask that Green Zebra is a convenience store, adding that she and her team are redefining what it means to be a convenience store in America. 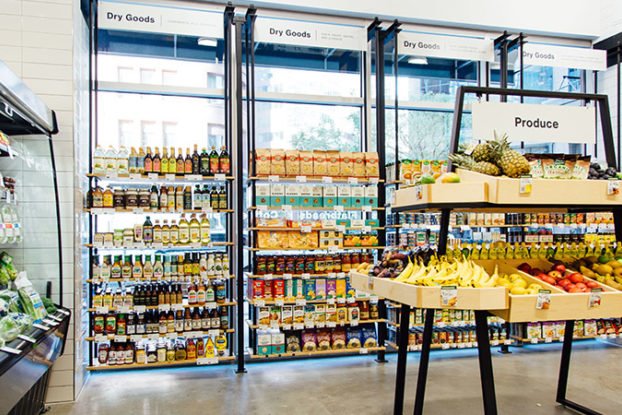 Chicago-based Foxtrot actually started out as an online-only food delivery business. But, according to CEO and co-founder Mike LaVitola, for legal reasons it required a brick-and-mortar location, so the five-store-and-growing chain was born.

The Foxtrot stores, which even have comfortable couches in them, serve not only as an upscale, small-format combination restaurant/convenience store; they’ve also become community gathering places akin to a cafe. LaVitola says the chain’s revenue is divided about evenly between in-store sales and delivery.

At convenience stores, fuel sales still remain tops — the sector sells about 80% of all gasoline in the U.S. and is responsible for 64% of sales at c-stores, according to NACS. But foodservice is a fast-growing category. Foodservice sales now account for 23% of overall sales at convenience stores, reflecting growth of 3% over the last five years, according to the 2019 NACS State of the Industry Report.

Produce sales are also booming in convenience stores, registering about $242 million per year. That’s a fraction of the $61 billion in produce grocery and mass merchandise stores like Walmart sell annually; but considering a mere decade ago the majority of c-stores didn’t even offer produce for sale, it’s significant. 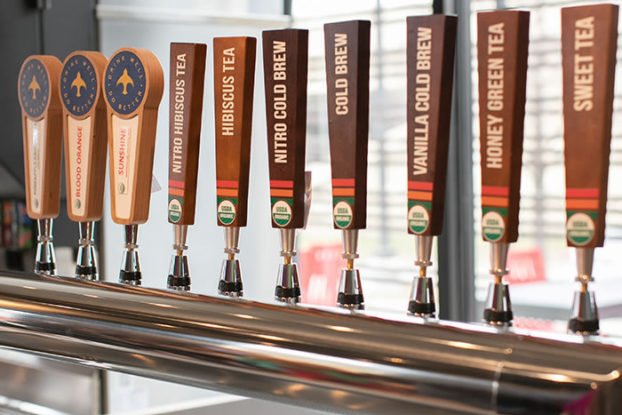 Irving, Texas-based 7-Eleven, the world’s biggest c-store chain, is responding to the upstart disruptors and Amazon with what it calls its new 7-Eleven Lab Store. The 6,000 square-foot fancy convenience store in Dallas has an in-store taqueria from Laredo Taco Company, where shoppers can get fresh-prepared carne guisada, picadillo bistec, carnitas and more, organic teas and kombucha on tap, fresh-baked goods made in-store, a cafe featuring specialty coffee drinks, cold-pressed juices and smoothies, premium grab-and-go-foods and organic and better-for-you groceries on the shelves.

The store, which has indoor and patio seating, also has a growler refill station featuring local craft brews on tap and a frozen yogurt station with a gourmet toppings bar. “The store is an effort to disrupt ourselves and redefine convenience,” said Chris Tanco, executive vice president and chief operating officer at 7-Eleven, Inc. in Dallas, when he unveiled the Irving, Texas lab store in March.

This lab store is customer-focused and will explore new ideas that weren’t even on the retail radar a few months ago.” 7-Eleven is planning on opening more of its upscale lab stores in the next year, including a second unit in the Dallas-Fort Worth, Texas area and a few in the western U.S. and on the east coast, Tanco said. Other big c-store chains including Wawa, the industry pioneer in offering foodservice in convenience stores; Sheetz, another foodservice early adopter, and traditional player Casey’s are responding in various ways to the upstart disruptors and Amazon.

Wawa, which has more than 800 stores, is expanding its already extensive restaurant and grab-and-go prepared foods offerings into more premium and better-for-you offerings. The Pennsylvania-based convenience store chain has become such a major player in foodservice that its CEO, Chris Gheysens, was invited to be a keynote speaker at the National Restaurant Association’s annual conference.

Casey’s is also going more upscale. It’s created an in-store pizza parlor and bakery that even offers donuts made from scratch, where shoppers can have a meal and grab other prepared foods and baked goods to go. Casey’s has also started delivery at many of its stores.

“Convenience store retailing as we’ve known it is being reinvented,” Riggs of Alltown Fresh said. “Convenience remains key. But many in the industry are realizing you don’t have to sacrifice convenience for quality and fresh,” he said. “We’re laser-focused at Alltown Fresh on creating a fresh, premium and better-for-you offering because we see a market for it.”