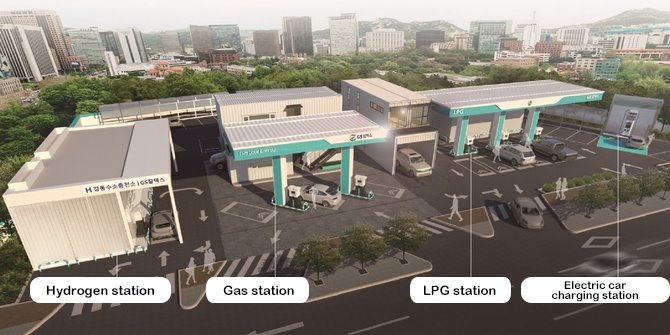 The company held a groundbreaking ceremony for a new hydrogen station in Gangdong District, eastern Seoul next to gasoline and LPG station in Seoul that also host a fast charger for electric cars.

Once construction of its hydrogen station is complete in December, GS Caltex will manage its first Total Energy Station in Seoul where all vehicle types are able to fuel power, an unnamed company official said.

The hydrogen station – jointly set up by Hyundai Motor Co. – is a commercial charging station directly managed by GS Caltex in line with the government’s policy aimed at boosting the country’s hydrogen economy. The station will be capable of fully charging more than five electric-powered hydrogen vehicles per hour and more than 70 a day.

GS Caltex’s hydrogen station is also considered safer as it does not directly produce hydrogen but receives supply from outside via tube trailer.

The company official said that the new station will help resolve inconvenience of filling in hydrogen in Seoul due to lack of facility. It will also contribute to expanding supply of environmentally-friendly electric-powered hydrogen vehicles.

They offer electric car drivers to charge battery at the same price offered by the Ministry of Environment. They also support simple payment via mobile application. GS Caltex has also joined hands with electric car-sharing service Green Car to allow consumers to borrow electric vehicles from its stations equipped with battery chargers.