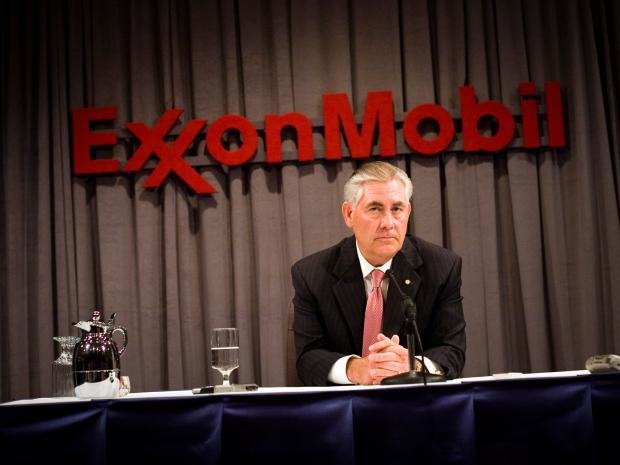 President-elect Donald Trump has chosen ExxonMobil CEO Rex Tillerson to serve as secretary of state, the transition team, setting up a heated Senate confirmation battle and signalling a desire to ease Washington's estrangement with Russia.

Like Trump, Tillerson, 64, has no formal foreign policy experience, but has built close relationships with many world leaders by closing massive deals across Eurasia and the Middle East on behalf of the world's largest energy company.

"His tenacity, broad experience and deep understanding of geopolitics make him an excellent choice for Secretary of State," Trump said in the statement.

Romney confirmed he was not the pick in a Facebook post Monday night, and Trump tweeted that he will announce his pick Tuesday morning.

Trump has called Tillerson a "world-class player" and the transition team is likely to stress that his mastery of complex negotiations and knowledge of geopolitical factors shaping the oil industry are directly relevant to heading US diplomacy and managing the State Department.

Tillerson was recommended to Trump by former secretaries of state Condoleezza Rice and James Baker and former Secretary of Defense Bob Gates.

Trump and Tillerson possess similar dealmaking business backgrounds and similar views of the world, sources said, and there was a level of comfort that Trump hadn't found with anyone else.

Trump's decision to press ahead with the Tillerson nomination could ignite the first big showdown between the new White House and Capitol Hill and set a benchmark for Republicans worried about the direction of the President-elect's own foreign policy. It will also embolden Democrats who see Tillerson as perhaps the most vulnerable Trump Cabinet appointee to a bruising Senate confirmation battle.

Republican hawks such as Sens. John McCain and Marco Rubio are deeply perturbed by the close relationship Tillerson forged with Russian President Vladimir Putin. They fear Trump and Tillerson would bring US policy far more in line with Russia, which is locked in the worst confrontation with Washington since the Cold War and is seeking to again become a great power rival to the United States.

Tillerson, a multi-millionaire, will be an easy fit in the roughly one-third of Trump's emerging Cabinet which is made up of corporate titans and wealthy Wall Street players. He is also another down-payment by the President-elect to tear down the political establishment in Washington and to replace the inhabitants of what he has called a "swamp" with new blood and potential cabinet secretaries with real world experience.

But in order to be confirmed, Tillerson must satisfy senators that there is more to him than a businessman eyeing a new challenge in statesmanship.

Not much is known, for instance, about his personal views on international relations as distinct from the positions of his company.

His views on the alliances like NATO and in Asia that have sustained American power and global security since World War II — on which Trump cast doubt during the presidential campaign -- are largely unknown.

He will have to explain why his own lack of formal foreign policy experience is not a disqualifying feature of his resume. After all, negotiating is just one aspect of the job of secretary of state. The top US diplomat must also frame a coherent foreign policy doctrine for the United States, exemplify its values, have a deep grounding in history and understand the complicated motivations of its international partners and adversaries.

The confirmation hearing would also force Tillerson to develop positions on issues ranging from global warming to North Korea's nuclear program and US humanitarian aid in the developing world.