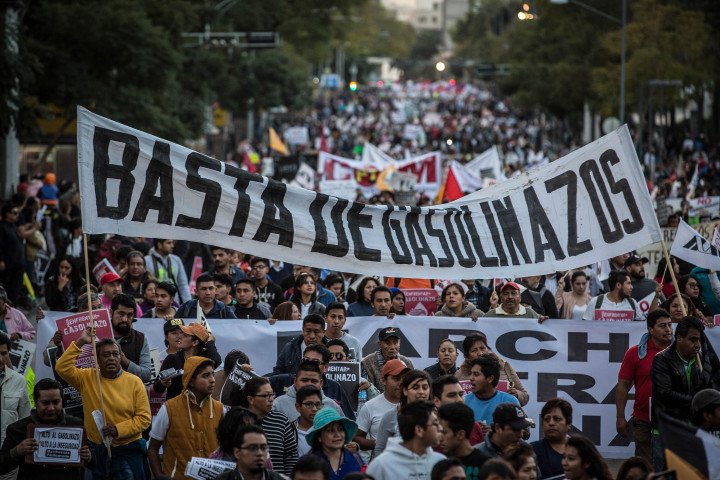 Mexican lawmakers are calling on the government to bring down retail fuel prices along the northern border to align with prices in the southern US, following protests against pump price increases of up to 20pc at the start of the year.

A permanent legislative commission — made of 19 congressmen and 18 senators — petitioned the finance and energy ministries to immediately introduce a new subsidy for northern fuel retailers. A fuel tax break for northern border regions was already put into place in 2015 to help reduce the price gap, but with the recent hikes it is now seen as insufficient.

Mexico's finance secretary has yet to comment on the matter but so far the government has kept a united front, with president Enrique Pena Nieto (PRI) arguing that pump prices had to rise in order to sustain social programs.

The unrest erupted when gasoline and diesel prices increased starting this month by 14.2-20.1pc in a transition to full deregulation of the fuel market at the end of 2018. Protests turned violent at times, with attacks on state-owned Pemex installations, trucks and retail outlets, as well as blockades of critical storage and distribution hubs at Rosarito and Mexicali, in Baja California.

The pump price adjustment is a pillar of the 2014 energy reform that dismantled Pemex's long-held monopoly, opening up Mexico's oil industry.

The downstream opening has proven more difficult than expected. The government chose to expand the liberalization process over a two-year period, opting for a gradual, region-by-region method, starting with the northern states of Baja California and Sonora.

But the fuel price hikes, known as "gasolinazos," sparked a backlash, especially near the border, where Mexicans can cross into the US to fill their tanks with cheaper fuel.

"Today, while in some regions of California and Texas gasoline oscillates between 15.79 pesos and 12.24 pesos per liter, in Mexico we pay up to 17 pesos…This disproportionate increase is diminishing the economic development of the border," opposition senator Marcela Torres Peimbert said yesterday.

The government and energy regulator CRE are scheduled to readjust pump prices on 4 February and again on 11 February but it is not clear if it would be willing to change the way it calculates the prices to bring down the price. Starting on 18 February, prices will be updated daily.

In their proposal, lawmakers also argued in favor of a new loan program to help franchise owners upgrade and modernize retail stations so they can compete against new retail fuel groups. Such groups include local brands such as Hidrosina; OXXO Gas, a division of local beverage retailer Femsa; Combured; Gulf Mexico, the Mexican affiliate of Indian conglomerate Hinduja; and foreigners like BP, which said it is analyzing investment opportunities in Mexico's retail market.

Access to Mexicali and Rosarito fuel hubs in the northern state of Baja California has now been re-established and are guarded by security forces. No other Pemex facilities are currently blocked by protests, a company spokesperson told Argus today.